"Since the day of my birth, my death began its walk. It is walking towards me without hurrying."
- Jean Cocteau

And so to the cinema. I have been to see "Le Tout Nouveau Testament", a surreal and inventive riff on the question of why, if there is a God, there are so many bad things in the world. In this film it's because the almighty is a misanthropic bully who lives in Brussels and spends his days inventing universal rules that make the life of mankind less than optimal. The one that struck the biggest chord with me was number 1522, but they were all recognisable to the audience. His daughter, with a bit of assistance from her brother (you know the chap - it's his birthday soon), rebels and tells everyone the date of their death. Hilarity ensues. No actually it does; the film is very funny. 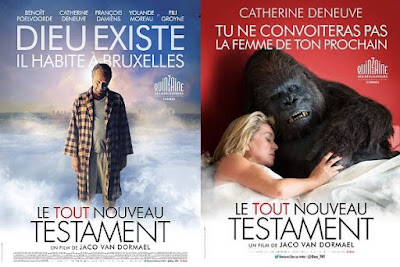 It's a constantly creative delight featuring Catherine Deneuve, a gorilla, Munchausen syndrome by proxy, a murmuration of starlings and a whole lot of washing machines amongst many other oddities. One character, upon discovering exactly how long he has left alive, decides to spend it making a model of the Titanic out of matchsticks; an idea that is possibly a bit close to home for some of us. The film provokes thought rather than directing in which direction those thoughts should go and I don't think it's disrespectful to religious beliefs. The question of why God lets bad things happen has been asked before; believers must surely have their answer ready by now. It's a sweet and very moral film - for those of us who don't find sex immoral - and, if you don't find it entertaining then I wouldn't bother going to the cinema ever again if I was you.

It also feeds my love of synchronicity by in large part being about whether one would live one's life the same way if one knew how it would develop, the same theme as Arrival, which in other ways could not be a more different film. There is a minor plot point revolving around Proust's 'À la recherche du temps perdu' - a reference to which appeared here less than a fortnight ago - but this time mixed in with a splash of Officer Crabtree.

Oh, and don't leave before the end of the credits.

Law 1522: If one day you fall in love with a woman there's a great chance you will not spend your life with her.
Posted by Epictetus at 08:15