And so this is Christmas...

"I will honour Christmas in my heart, and try to keep it all the year." - Charles Dickens

Or, to be more precise, it isn't Christmas yet. It is a well known phenomenon that the onset of the Christmas season gets earlier each year. In Otley it starts with firstly the turning on of the lights which was last week - I didn't go - and then with the annual Victorian Fayre, as the Victorians almost certainly didn't spell it. I mentioned last year that I normally choose that staple of the nineteenth century working class festive fare, the samosa. However, and shockingly, there weren't any this year. I therefore opted for a potato and coriander pattie from the vegan street food stall followed by a Malaysian chicken wrap. We do things in the old fashioned way here in the West Riding. There was also once again no reindeer, but there were owls and donkeys, which had to suffice. 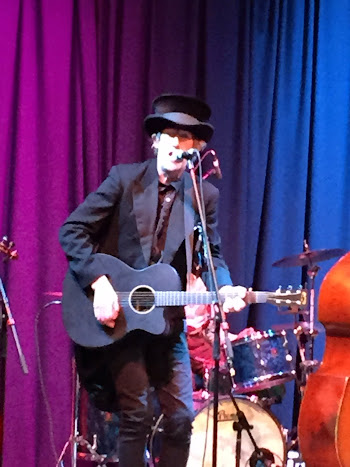 This year the big day was preceded by a Victorian Folk Extravaganza the night before. The performers, though thankfully not the audience, entered into the spirit of the event by dressing up. They mostly went for Thomas Hardy type costumes, appearing to have wandered in from either the set of 'Far From The Madding Crowd' or from a Ronnie Lane's Slim Chance gig according to one's perspective. The always excellent Yan Tan Tether looked like a themed version of the old 'I know my place' sketch that featured John Cleese and the Two Ronnies. Yan was a mob capped indoor servant, Tan was a lady from the gentry and Tether had come as Alfred P. Doolittle. Helen McCreary, who joined the Jon Palmer Acoustic band on 'Meet On The Ledge', was dressed as if she was on her way to cheerleading practice, but she's an American, and maybe things were different over there at the time. But the main honours must go to Jon Palmer himself who gone part Dickens and part Tenniel. He sported a long tailed jacket and a truly magnificent hat. Upon spotting his headgear I reached purposefully into the man bag to fetch out the camera which, as recently advised, now accompanies me everywhere. Unfortunately the battery was flat so I had to pinch the pictures above and below from Twitter. 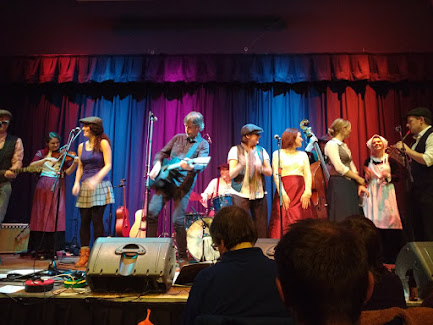 Musically it was very good, although I could have done with fewer seasonal songs; in fact none at all would have been fine by me. Jon Palmer was as good as ever (the new drummer must be at least fifty years older than the previous one) and I could listen to the unaccompanied singing of Yan Tan Tether for hours, especially as they once again did the Jake Thackray song after which they are not named. New to me was Bella Gaffney, whom I also very much enjoyed. She has a soulful voice for a folk singer, a versatile guitar technique (I was reminded of Catfish Keith himself; there is no finer praise), her between song banter is most entertaining and, according to others who pay more attention to these things than me, is rather easy on the eye.
Posted by Epictetus at 11:21