There isn't much about my wargaming where I have the edge over James, but I'm going to claim a minor victory in terms of speed of project from inception to table. It's only taken ten months or thereabouts since I ordered the figures and there was a Great War game this week. 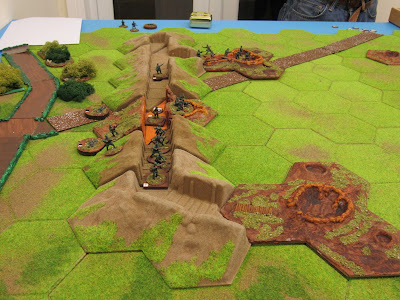 I umpired and rather enjoyed it all. Richard Clarke states in his introduction to the scenario supplement 'Stout Hearts and Iron Troopers' that the first six scenarios are intended to enable players to both learn the rules and the appropriate tactics. The one we played - the very first - is predicated on the British attacking with full vigour when, or so it seemed to us, their best bet is to sit off and used the Lewis gun and rifle grenadiers to blat the Boche from a distance. 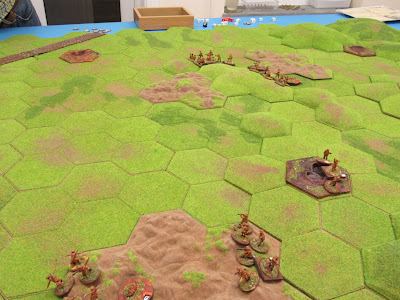 For the record the game ended in a British victory when the German HMG team ran away, having jammed a ridiculous number of times. I think we picked up the mechanics reasonably well, although as one would expect there was confusion and debate about some specifics. The Lardies Yahoo group is a good resource for sorting out these things. As I've said before about other rulesets, I think perhaps the Ilkley Lads house style is a tad gung-ho; for some reason we have a group aversion to voluntarily pausing for breath during a game.

I think we'll give it another go. There was a consensus that it's best left until we've just about forgotten how to play it and so that is what we'll do. I have enough forces for the second scenario - they're only marginally bigger than the first - but need to work out how to layout the trench system. Looking ahead after that, I am unlikely to put on the third scenario, which requires half a dozen houses that I don't have, or scenario four, which uses tanks that I don't have either. What I shall do, once the Celtic slingers are finished of course, is start to paint up the forces for scenario five, in which the Germans are the attackers for a change.
Posted by Epictetus at 19:18

Email ThisBlogThis!Share to TwitterShare to FacebookShare to Pinterest
Labels: game reports, Through the Mud and the Blood, wargaming annexe, WWI