The first wave goes in

An hour or so of spare time saw the Bashi Bazouks begin their attack. 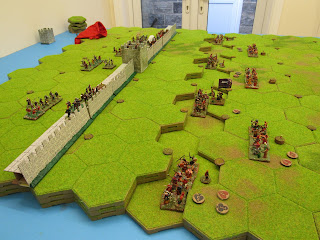 After the first turn they had reached the moat, but not managed to fill any of it in yet. I have made some changes since the game was originally set up. Both the moat and the wall are now in small squares which can only hold one unit. The use of movable markers to demarcate the grid allows this sort of flexibility. 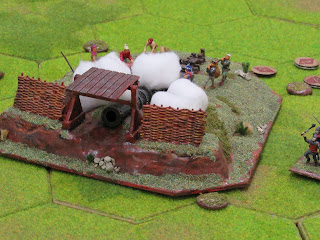 Good news for the defenders as the Great Gun of Orban blows up on its first attempt to fire, in a straightforward example of the things one takes a long time over modelling and painting being completely useless on the table. Orban also fails his saving throw and dies, which may be an appropriate comeuppance for being a mercenary, but is not going to be a very thorough test of the rules for breaching the walls. 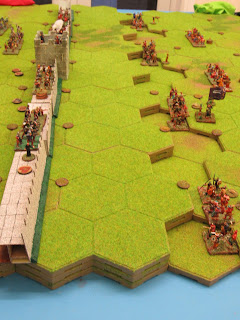 At the end of the third turn the attacking infantry have begun to have success in filling the moat. The defenders suddenly find themselves possessed of an extra unit of Genoese crossbowmen, no doubt rushing from elsewhere in the city in response to the assault; otherwise it looks like they'll never drive off the pesky Azabs. Missile fire is not particularly effective in TtS!. I'll decide later whether they need to lose a unit of Byzantine melee troops to compensate.
Posted by Epictetus at 09:50