My plans for the couple of weeks or so - the school holidays in effect - are up in the air for a variety of reasons, so I thought I would set up a solo game in the annexe which I could dip in and out of as time allowed. Something compact and small scale would seem to be in order and therefore I have chosen to have a go at the Siege of Constantinople, which I have promised myself for many years that I wouldn't do. As a digression, does anyone else remember that one of Donald Featherstone's books contained photos of a chap who was refighting Stalingrad at 1:1. Even as a naive and credulous youth I regarded that as a bit of a stretch. 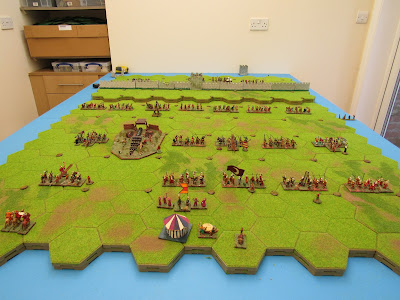 My scenario is loosely based on that in the Siege & Conquest supplement for Warhammer Historical. I've only used one row of walls for no better reason than I've only got enough walls to make one row. My Hexon terrain does however allow for a fairly decent looking 3D moat to be laid out. 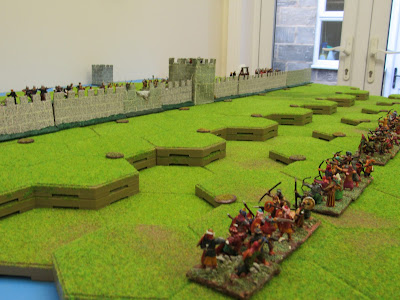 The scenario deals with the final assault in the area around the Gate of Saint Romanus. Sadly there is no place for many of my siege related toys such as the Ram, the Tower, the Pick and of course, the Crow. However, I couldn't resist finding room for the Boiling Oil. 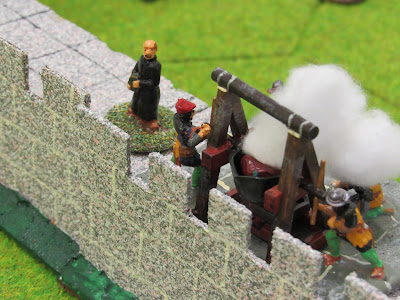 The Great Gun of Orban naturally features for the attackers. 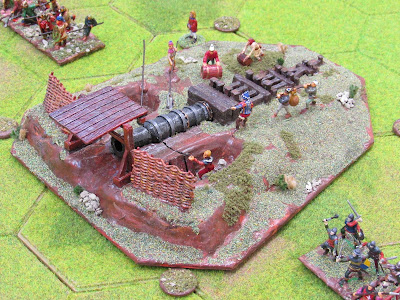 I'm going to play it using To the Strongest! and you can see the grid laid out using the markers which I use for the purpose. Piquet would normally be my ruleset of choice for solo games, but it's such a faff to prepare the cards decks for the first time, and I just wanted to get on with it and take my mind off things. I do own a copy of Warhammer Ancient Battles, but have never been tempted by them. 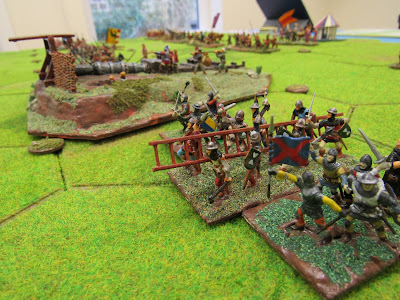 The attack will take place in three waves: Bashi Bazouks, Christian allies and finally the Janissaries. Each will continue until they reach the command becomes demoralised (is that the term?) at which point they will be removed to be replaced by the next. I have some ideas regarding crossing/filling the moat, escalade, the role of the Emperor, and not forgetting Hasan the Giant of Ulabad; but the advantage of playing solo is that one can change the rules as one goes along. Oh, hang a trout, that's what we do anyway.
Posted by Epictetus at 09:19