Thy Will Be Done


7 Wonders: Armada: I've always liked 7 Wonders without ever being any good at it. One of its strengths for me is that it is very scalable; you can play with up to seven people and it's just as good and doesn't take any longer. The various previous expansions never did much for me, but I rather liked this one wherein one sails little boats up various tracks in addition to all the usual stuff. There is more interaction than with players other than one's immediate neighbours, but it still doesn't seem to slow it down.

Crusaders: Thy Will Be Done: And this is the one. It's not a wargame, but its theme of wandering round Europe biffing infidels of various types and building castles, cathedrals etc, while taking every opportunity to dick over one's opponents, may well appeal to readers. It has a very clever structure combining mancala and rondel mechanisms with individual player tweaks supposedly based on the historical crusading orders. On top of all that we played our first game, including rules explanation, in an hour. As you can tell, I liked it. 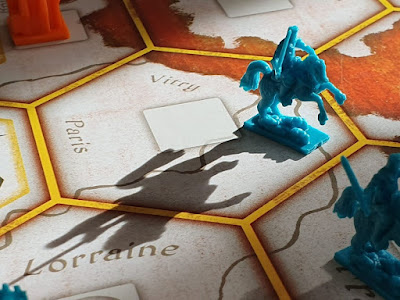 Cryptid: This was explained as being a thematic version of Zendo; it's rather more like Cluedo with bears and abandoned cabins replacing the Reverend Green and the lead piping. A tad ho hum.

High Society: Excellent little filler which involves bidding to win various cards except when they're bad, in which case one bids not to win them.

Illusion: More of an activity than a game this one. It involves trying to rank patterns in the correct order of how much of a particular colour is in them. Despite my colour blindness I was rather good at it; the colours used are quite distinct. The problem with it as a game is that one's success or otherwise depends pretty much entirely on the player to one's left. If they are not very good at it then you will win. Still, it was an interesting way to spend ten minutes or so.

NEOM: One of many games where one builds cities based on tile selection - via drafting in this case - with various constraints and scoring criteria. It did nothing to stand out from the others, although I did build a pretty impressive park.

Terraforming Mars: This is currently number four in the Boardgamegeek rankings of best games of all time. I confess that I don't see it myself. I enjoyed this play more than the last time I played it about eighteen months ago, but it still goes on far, far too long. I've only played one other game in the geek top ten - Great Western Trail at number nine - and I didn't like that either. It's everyone else that's wrong, not me.