We had another game of Square Bashing last night, which ended up posing more questions than it answered. I'm afraid that the British, defending this time, got creamed again. The overall impression one has of the Western Front is that it favoured the defender, but these rules seem to do the opposite. In particular, once a unit starts winning assaults it seems very hard to stop them. In that sense it reminds me of "For, Lords, Tomorrow is a Busy Day", although from memory archery fire in those rules is more effective than machine guns appear to be here. 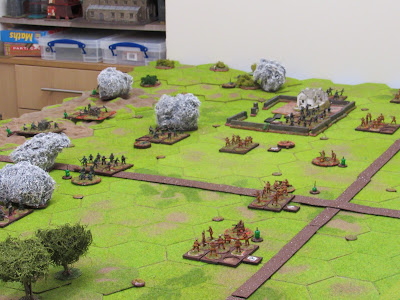 Traditionalists will be pleased to learn that the units taking to the table top for the first time - the German flamethrowers - achieved nothing and were destroyed as soon as they came into contact with the enemy. In fact (realistically?) an awful lot of things were destroyed. I was a bit concerned that the game was taking a long time, but I suspect that had we carried on then the remaining moves would have been quicker simply because there was nothing left to move or shoot with.

I rashly promised that we would have a British attack using tanks next time, but have changed my mind already. I have ordered some more tanks, so will leave things until I have built them and we can field a worthwhile number. Instead the next game will be pretty much a repeat of last night's, but this time the British will be defending trenches.
Posted by Epictetus at 15:28