It's been a few days, so it must be time for some photos of a wargames table that look very similar to the last lot I posted. Although, as promised, the tanks are making their first appearance: 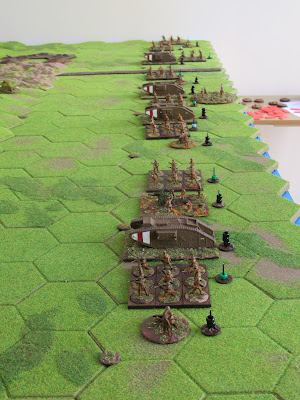 We are going to have a try of the August 1918 Amiens scenario included in the Square Bashing Army List Book. Normally at this point I would complain that it is badly written and difficult, or even impossible, to put on the table. However, while I am not suggesting it is a masterpiece of clarity, I think on this occasion I may have misinterpreted what they were getting at and made things somewhat worse myself. I'm not sufficiently certain of anything to go to the effort of changing things round so we shall go with what we have. 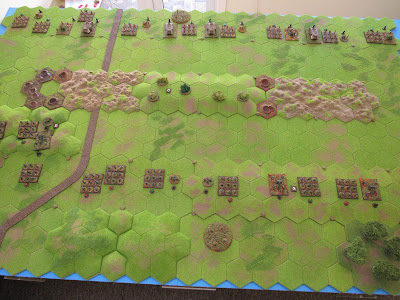 As usual the players will have a chance to rearrange their forces, the defenders will be depleted by some of their forces being moved off table as reserves and then they will be able to place some defences, in this case covering five squares. 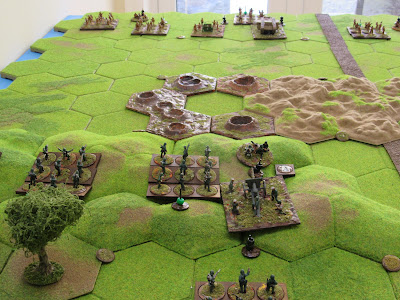 Last week we finished the game within the requisite three hours so it can be done. Aside from getting to grips with the rules for tanks this week should be even quicker because the countdown is from 16 rather than 21, to reflect the British need for a quick advance. I suspect that the German's main hope is for the game to be over quickly. Neither side has as much as usual in the way of off table artillery support so we should also get a chance to better understand the value of the other asset options (morale, extra oomph in attack, yet more defences) and the timing of calling in the barrages may be critical. 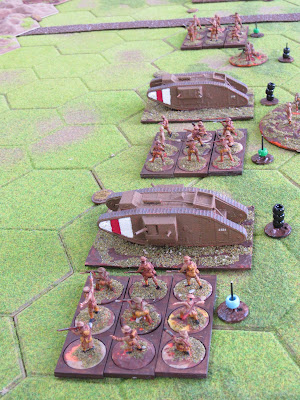 Another view of the tanks. I made the red and white markings a bit larger than they actually were just for a bit of visual impact; I'm sure that the lines were straight when I painted them. I left off the rails for the ditching beams which were so fragile that they would have snapped off immediately anyway. The black beads are strength points for tanks, field guns etc. The other beads mark the quality of infantry units: blue for professional, green for regular, red for reservists.
Posted by Epictetus at 13:51