OK, so the table in the annexe is set up for another game of Square Bashing. We're going to try the Trench Game pretty much as written in the book, although without the potential for a mine explosion, the rules for which are far too arbitrary for my taste. Given their love of complex pre-battle set up routines you would think that Peter Pig could have come up with something slightly more sophisticated than an opposed die roll. 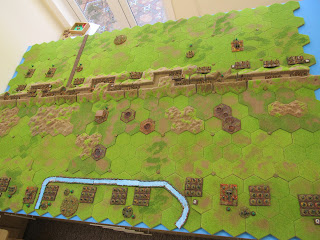 Whilst I rather like the basic structure of the game there are problems. As with seemingly every set of rules ever published they are badly written, edited and proofread and have ended up full of inconsistencies, bits that are unclear and missing whole chunks of information. Still, I think they are worth another couple of games trying to play them as written before changing anything major. The game after will be the Amiens scenario included in the rules; it requires four British tanks and work is underway to build two more. 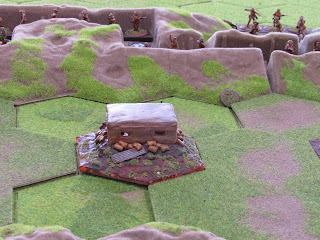 One change that we will make this time is that the German player will have to secretly decide where the stormtroopers are going to appear prior to the British depletion roll. It's all a bit too easy for them otherwise.
Posted by Epictetus at 10:32