Three or four weeks ago I posted about a Seven Years War game we were playing and said that because it looked inevitable that I would win that it was therefore pretty much a certainty that I wouldn't. I seem to have not bothered to write up the conclusion which was indeed that I lost, having failed Major Morale twice in quick succession. We had something similar last night, when James had thrown in the towel, only to triumph at the last gasp. Square Bashing has its faults, but it provided an entertaining evening for us. 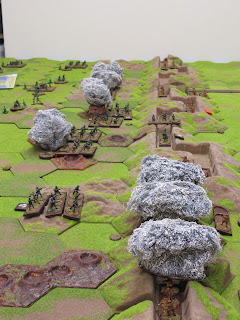 Sadly the photos aren't going to get any more exciting than the one above. The Great War really isn't a colourful period; never mind - tanks next week. The trenches came about because it had been observed that the attacker had won very easily the week before in a period where defenders are generally considered to have the edge. A quick thought led to the realisation that perhaps that was because we hadn't given them anything to defend, and so we did. They proved very hard to take, especially with machine guns in, and overall it's hard to fault the logic of that.


I was keen to play a game through to a conclusion and to implement the victory conditions as written, hence not letting James give up. I find the scoring method overly complex and doubt that there is any particular science behind it, but felt it deserved a look see. As in other Peter Pig rules there is a countdown mechanism so that you are never sure how long the game will last, although in this particular case we all knew for sure when the last move was. I don't find that any more artificial than, for example, the Major Morale rule in Piquet mentioned above. It is just a question of assuming that the dice rolls, card draws etc represent an exterior narrative to do with time, or the strategic position, or something like that; basically one has to go with the flow. 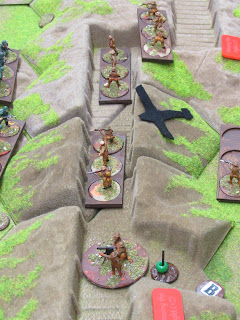 As I said we knew when the final turn was, so Peter as the attacking Germans took his last chance to try to seize two of his objectives (sections of trench) and then James as the defending British took his last chance to throw him out of them. In essence Peter lost because he chose to attack in a manner which gave him the best chance of winning the melee, whereas it turned out that he should have attacked in a way that gave him the best chance of moving troops into and holding the objective assuming that he did win the melee. It's just a question of finding the nuances in the rules. But overall it gave a game that went backwards and forwards and which until the end either side could have won; whatever else may be wrong with Square Bashing, that is a tangible positive.
Posted by Epictetus at 11:58