Help is sent for

"You that way, we this way." - Shakespeare

Lion Rampant has an activation mechanism which poses a similar dilemma to, for example, To The Strongest!. Does one try to move the most useful unit if it is more difficult to do so than activating something which will be of less value? Of course one does, silly question. And so the besieger's Men-at-Arms failed to activate on the first turn, and the defenders' messenger quickly moved twice to the pursuers once. 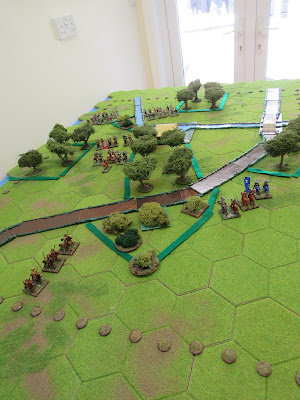 I diced to see which way that the MAA went, but in any case I think logic says that after failing to move and with the light cavalry screening the other route then what they did was appropriate. A Rash leader attached to unit which already has the Wild Charge attribute means that they must charge at anything in reach. However, I decided that they couldn't see the foresters lying in ambush and so didn't have to. 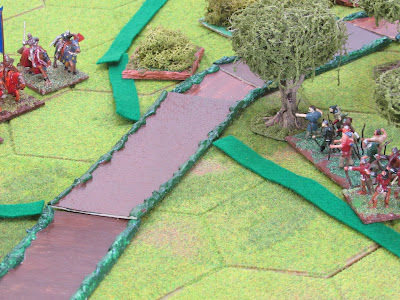 Elsewhere the besieger's infantry had moved to block the route of the cavalry hoping to delay them until their own heavy cavalry turned up. That unit, right at the top of the next photo, was about to be fired on by the foresters. 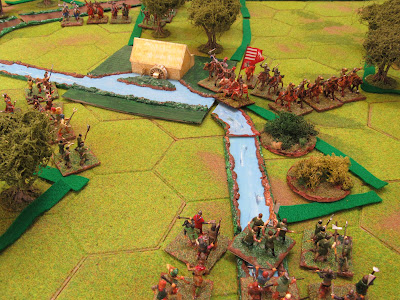 The ambush caused no casualties, but now the MAA were aware of the bowmen  they were forced to charge them. 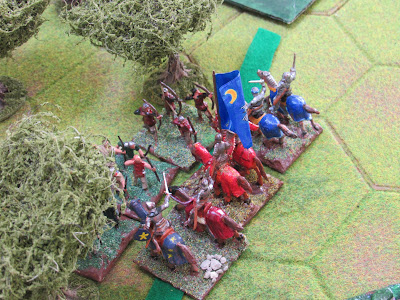 Unsurprisingly they caused many casualties and the foresters fell back Battered (*). They carried on falling back and getting weaker for the rest of the game. One LR rule which I rather like is that Battered units get an automatic chance to rally each turn, but if they fail they retreat further and take another casualty, which in turn makes it less likely they will rally next time. 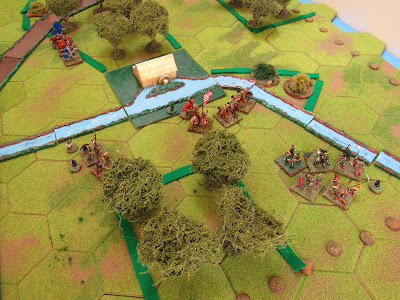 On the other side of the stream from the watermill there were a couple of cavalry versus infantry melees. The unit with the messenger attached got thrown back, but despite the leader's Vulnerability (which made it three times more likely that he would be a casualty) he survived, as did the messenger. The infantry themselves failed their courage test and fell back Battered. The light cavalry had similarly pushed back and Battered the other infantry unit. 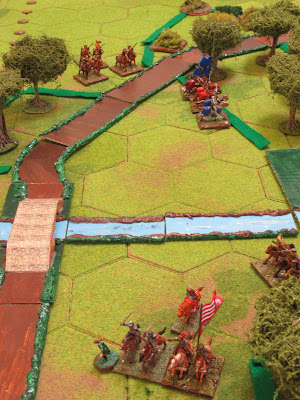 The same light cavalry then destroyed the Battered infantry blocking the way to the exit point allowing through the unit with the messenger. I called the game at that point because the Rash leader will be forced to charge the cavalry behind them (no facings in this game) and the messenger will get three attempts at least to move off table.

So, the siege game is underway with a victory for the defenders which makes it more likely - but not certain - that the besiegers will have to storm the town before making as many preparations as they would wish. It took an hour or so and passed the time quite nicely. If I was going to do it again I would make the stream a more significant barrier than the basic rules suggest.

* I know that term just means the same in context as Shaken, Broken or Disordered, but it really is a ridiculous word to have chosen.