There's an article in this week's Economist about the big cats which roam Britain killing sheep while at the same time evading capture either physically or in an irrefutable photograph. Apparently these sightings first started to be reported during the Industrial Revolution, a phenomenon ascribed to new city dwellers yearning for the rural lifestyle they had left behind. After finishing the article I still wasn't entirely sure why this nostalgia took the form of imagining animals which had been extinct in this country since the last ice age and which none of those involved would ever have seen. Even the Eurasian lynx had disappeared over a thousand years before that. Not, of course, that a lynx is a big cat, the difference being that big cats roar while the others merely purr. Here's a picture of a lion on a rampart, as out of focus as it should be: 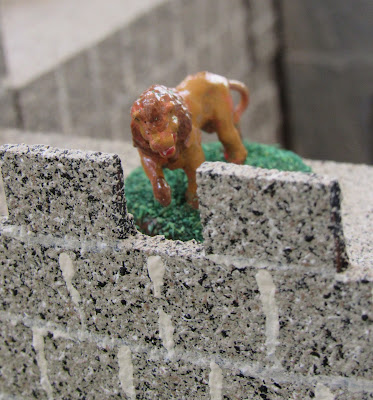