“Remember, there are more people in the world than yourself. Be modest! You have not yet invented nor thought anything which others have not thought or invented before. And should you really have done so, consider it a gift of heaven which you are to share with others.” - Robert Schumann

James has given a big thumbs up to Soldiers of Napoleon, as you may already have seen. We've now played three times (i.e. one and a half games) and I still get the impression I'm the least enthusiastic of the four of us. You can't read too much into that; apart from anything else it's an inescapable fact that someone will have be in that position. The context is important as well: we're clearly still not playing them as written; it has become obvious that the text does not adequately reflect what the author and his play testers actually did in practice; and even when one has the rules correct - whatever that means - one still has to get one's head around the best way to play. Picking up on that last point, I'm fairly sure we've been playing the skirmisher rule correctly from the beginning, but it was only last week that I suddenly had an epiphany as to how one used it in practice (*).

I agree with James that the way skirmishers are handled is elegant and makes sense. We had tried something a bit similar with Piquet, but for whatever reason didn't quite arrive at the same rule. On the other hand I think the event cards could very easily get a bit samey each game, because there aren't that many different ones. If one is lucky enough to get the ones that target the other side's artillery or commanders early on, when the situation is less sensitive to what card you play, then they will always get used; later on in the game they probably won't. As for the Big Battle rules as written (**) they are even more pants than the 'How Goes The Day' mechanism. 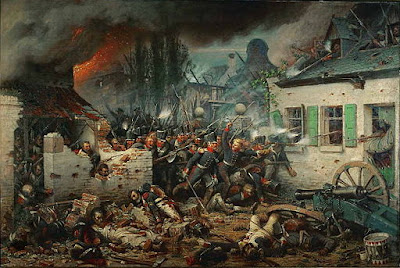 One of the issues we had, and which led to the sort of calm, rational, evidence-based discussion so often seen in the legendary wargames room, related to infantry attacking buildings. A lesser man than your bloggist would point out that the answer received back from Warwick Kinrade - namely that units must adopt a special 'attacking buildings formation' - was precisely what I have been saying about the same situation in Piquet. But, as I hope you all realise, I am better than that.

* Apparently you put them out at the front of units and they shoot at things.

** Or to be precise, as James says they are written; I don't own a copy and haven't read them.