The lack of postings here, and the fact that medieval cattle raid hasn't been played yet, are of course due to scorchio. Indeed the only reason I am writing this now, is that the cumulative effect has all been too much and I have retreated indoors. This is not to say that there has been no wargaming. We completed our second game of 'Soldiers of Napoleon', about which rules I have nothing to add to what I have said previously. We shall have a go next week with move distances tweaked to match the specific size of table and bases, and I shall report back. It was fairly sweaty in the legendary wargames room on Wednesday, but nothing to compare with the sauna that was the Old Chemistry Theatre at Nottingham Trent University on Saturday for the inaugural Lard Workshop (*).

The Workshop, which took place alongside the BHGS Britcon show, was organised by Don, my old (very old) school friend and bandmate, despite which it was a great success. I for one thoroughly enjoyed it, and had a blast. And no one could say that it wasn't excellent value for money. For £15 one got a £5 voucher to spend with the traders, a free sandwich lunch (which was rather good I thought) and to play two games; what's not to like? The one thing wrong with it was the heat, plus it was very noisy. So the only two things wrong with it were the heat, the noise and the fact that the toilets were a long walk given that middle aged men need to visit fairly often. Having said that, there were a couple of gamers involved who clearly didn't have prostates, which was the first time I've seen so many female wargamers since, well, since forever; another good thing.

I was travelling light and didn't bring a decent camera, which I regret because the eighteen games on offer were all worth photographing. There was a Far East set game of Chain of Command (possibly run by Richard Clarke himself; I wish I'd taken some notes as well as some pictures) which had more terrain crammed on to one table than I can remember ever seeing before. Very sadly I only took one photo of David Hunter's game of 'Infamy, Infamy', which I played in the afternoon, and that is very far from doing the table justice. 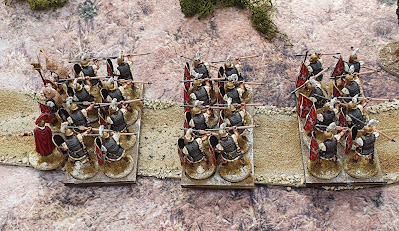 I'm playing the chap at the front left, tasked with getting my men along the road to a camp manned only by some unreliable slaves. The game was set in the civil wars of the early first century BC and, while I didn't get anywhere near the camp my Gallic ally and I had killed enough Italian rebels en route to win the game. I had played Infamy once, pre-publication and pre-pandemic, and despite reading through them again was feeling a bit lost at the start. However, as the game progressed I found it all began to make sense (**). Maybe I should get the chariots out before I forget it all again.

I took more - and more useful - photos of the game I had played in the morning, Sidney Roundwood's 'Flashing Blades'. It wasn't hard to get a larger amount of the action into the picture because everything happened in a 2ft x 2ft square. It's not obvious from the above, but it's mounted on a Lazy Susan (£14 from Amazon according to Sidney) and players seated around the table can easily turn it to allow them to move their musketeer. Because the Mousquetaires du Roi, opposed inevitably by the Cardinal's Red Guards, are what this cracking little game is all about. The rules are not yet published (***), but they are in a pretty polished state already. The rules have quite a lot of the boardgame about them - and I mean that in a good way - and produce a result that, at least in our game, was a positively cinematic narrative arc. I loved the game, almost, but not quite, with the same passion that James has for SoN. And that was only a little bit helped by it being one of my characters, Monseigneur d'Eclair, who rescued the Comtesse de Chablis from the scaffold and spirited her away.

Interestingly, in the afternoon Sidney ran a Samurai scenario using the same mechanics. As for what I spent my £5 on: a copy of the second edition of Lion Rampant, of which more when I have read it. To conclude, thanks to David, Sidney, my various teammates and opponents, Richard Clarke and, in particular, to Don for a most enjoyable, albeit hot, day of wargaming.

* If you are going to Google that, then I would try to be precise in your search terms unless you genuinely wish to find out the best way to render lard, which is a very different thing and quite possibly smells even worse that a hot room full of wargamers.

** Except perhaps the close combat rules, which are, shall we say, convoluted.

*** Next year possibly, depending on the rest of TFL's publishing schedule.