Having listed the flaws I'd previously come across in Lion Rampant, I have now been reminded of the good bits: they are really simple and really quick to play. Inevitably they (and we're still talking about the first edition; second edition out imminently) are a bit too simple in some ways. 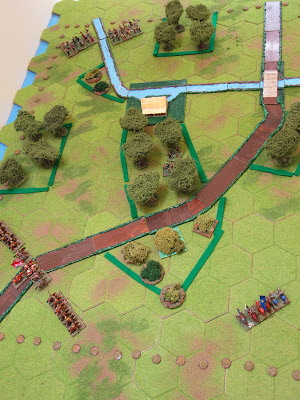 Our siege starts with the defenders sending out a messenger to request reinforcements. That's him at the back of those troops in the bottom left, who are his bodyguard. If he can get off the board in the top right between the wood and the stream then the siege may possibly be shortened by the arrival of a relief force. This is where the over-simplification starts to affect things. There are no rules for light cavalry without them being missile armed, but that doesn't fit my conception of the admittedly vague period in which the game is set. So the two flanking units are Mounted Yeomen without bows, and the middle one is Mounted Sergeants, being assumed to be a mix of the leader - a knightly sort of chap presumably - and some more light cavalry. I've also given them a small unit of local foresters (Bidowers in LR terms) who, having found out by some unspecified means of the impending breakout, have gathered in the wood in the centre to assist if they can. These are the only troops on the board who have any ranged fire capability. 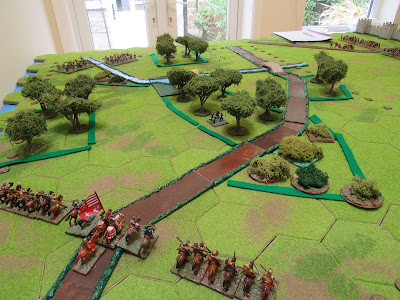 The besiegers, having been alerted to the messenger's mission have chased after him with a unit of Mounted Men-at-Arms. That's them in the bottom right corner of the first photo. They would appear to have used the tactic beloved by sheriffs and their posses in Hollywood westerns of trying to 'head him off at the pass' by taking a shorter route, despite in this case the messenger being the one with local knowledge. We must suspend disbelief. Their forces are rounded out by some infantry who have been foraging in the surrounding countryside. Because of this they are considered not to be fully armed and armoured and are rated as Foot Yeomen.

The defender's leader has rolled up as Vulnerable, and the besieger's as Rash. This latter attribute will prove to be decisive in the skirmish.