Let Loose The Cows Of War

On the second turn the besiegers start to construct some siege equipment, mainly because the original purpose of this whole thing was to get mine out on the table. However, they were obviously too close to the walls because on their turn the defenders were able to destroy it with missile fire. On the next turn the attackers started over again with the sawing and nailing, this time a bit further away. The defenders, who are apparently a feisty bunch, decided to 'Sally Forth'. After a bit more dice rolling their target was revealed as the besiegers' food supply, more specifically their herd of cattle. If they can kill or drive off sufficient of them the besiegers' ability to sustain an extended siege will, not for the first time, be impeded. 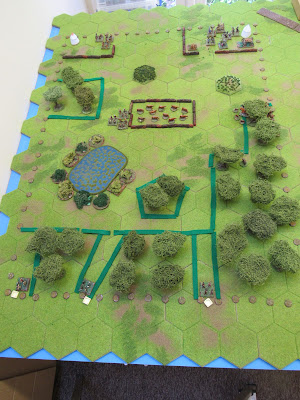 The friendly foresters, who have made a remarkable recovery after being ridden down by their social superiors during the previous fracas, are leading a couple of parties of soldiers through secret paths in the woods known only to them. The tiles at the bottom will be turned over when the relevant group is sighted: 1 means it's the group with the leader attached (although he has rolled up as Insipid, so probably not a great deal to be expected from him), 2 will be the other group, and 0 is a blind. The target is the pen in the middle of the table. 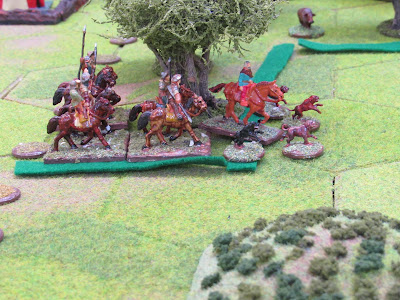 Unfortunately for the raiders, a few of the besiegers' leaders are having an early morning boar hunt, and their dogs, smelling something strange (perhaps the town is already running short of water for washing), have given the alarm. The boar himself seems quite unperturbed by it all. That chap who looks a bit like the messenger in the previous scenario (note to self: get some more medieval civilian horsemen) is their leader, and rolled up as a Braveheart. The hunters will have an activation penalty and be restricted to moving within the wood for the first couple of turns while they work out what's going on. There is half a unit of crossbowmen standing guard over the cattle and they will joined by others from the camp as they respond to all the noise.