6 Nimmt!: As I have mentioned before there is a strongly held view in certain quarters that playing cards at random is as good a strategy in this game as bothering to give it any thought. I don't agree; the winning strategy is to make sure you get dealt good cards.

7 Wonders: I rather like this game; I am rather bad at this game.

Castles of Burgundy: The Card Game: Those who have played the original boardgame say this is better. Or possibly they say that this isn't as good; I wasn't really paying attention. I gave it a 6 - 'Will play if in the mood' on boardgamegeek. I confess I was bothered by the blurb describing a game with Burgundy in the title as being about the Loire Valley and, probably more importantly, that the cards are too small to read properly.

Celestia: I gave this the thumbs up last month and enjoyed it just as much on a second play. An expansion has arrived - that was quick - and seemed to add variety without complexity.

Clank!: A deck building dungeon adventure, with the title coming from the need to keep quiet if you want to stay alive. The dragon attack mechanism is very clever, although nobody seemed in much danger in the game I played. I thought it was all inoffensive enough, but had rather switched off because the way the cards played out during the first couple of turns seemed to have put me so far behind that I didn't have a chance. And then suddenly I'd won by a mile; if I knew how then I would pass on a few tips.

Codenames: Excellent game which depends entirely on the person giving the clues. When it was my turn I came up with one for 'Cat' and 'Tail' with which I was rather pleased.

The Dragon & the Flagon: A programming game (think Robo Rally or Colt Express) about a tavern brawl in a fantasy setting, which I thoroughly enjoyed. There is something very satisfying about swinging from a chandelier across the bar and kicking someone off a table. No-one else enjoyed it though, so I suspect that we'll never see it again.

Evolution: Climate: Another expansion that seems to improve things; it's been an unusual month.This one involves the world getting progressively hotter or colder or, in the game I played, neither. This has quickly become the favourite game of one of the hardcore gamers that I know. Still, as his previous favourite was Keyflower that isn't necessarily much of a recommendation. 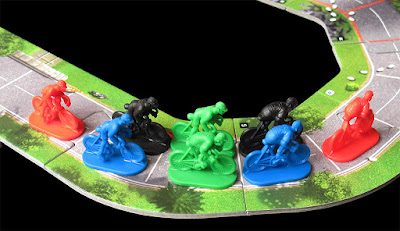 Flamme Rouge: I did slightly better this time, but still not very well. We played the advanced game this time, adding in the effects of going up and down hills. I recommend it.

Honshu: A map building game where the key factors are winning the turn order that you want - via a meld of bidding and trick taking - coupled with a sense of spatial awareness; the latter I just don't have.

Scrawl: This is to Chinese Whispers as Pictionary is to Charades.

Village Inn: It's Village, with added Inn. It's a very odd inn as well because you have to first make the beer and then take it with you when you visit the place. Even by the standards of many boardgames that's a thematic oddity. Anyway, it's a worker placement game where your workers have to die if you are to win. The activation mechanism is actually slightly more interesting than the worker placement label would suggest.

Email ThisBlogThis!Share to TwitterShare to FacebookShare to Pinterest
Labels: boardgaming