And so to the theatre. I have been to see 'Dare Devil Rides to Jarama', a play which speaks not just to my love of theatre, but also to my interest in military history, socialism, walking and speedway. I accept that the last of those might not have featured too much in this blog to date. Indeed it is an interest that might accurately be described as dormant, but nevertheless it's there. Despite (or perhaps because of) mon vrai nom it's the only motor sport that I've ever had any time for and I used to go to watch the Wembley Lions during their brief reappearance in the early 1970s.

The play was put on by Townsend Productions whose 'Ragged Trousered Philanthropists' and 'We Will Be Free!' - the latter about the Tolpuddle Martyrs - I had both seen and enjoyed. With only a cast of two they recreated everything from dirt track racing, the wall of death and the mass trespass on Kinder Scout through to Franco's advance on Madrid, with the audience providing appropriate sound effects when required through the use of those rattles that one sees in old film of football matches. The one point where the audience participation fell a little flat was when we were invited to jeer at the leader of the blackshirts; I obviously can't have been the only one to find the portrayal more Spode than Mosley. 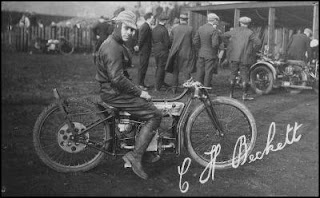 The story is that of Clem Beckett, champion rider, union organiser, rambler, and anti-fascist who, as member of the British Battalion of the International Brigades, was killed on the first day of the Battle of Jarama. Sadly the telling of it matches up neither to its inspirational subject matter nor the theatrical verve and skill with which it is presented. The play just isn't particularly well-written and despite the acting and the design - both very good - it fails to engage the emotions. Beckett himself came across as rather selfish, which for a man who gave his life for someone else's cause is a real own goal by the author.

However, I'm glad that I went and look forward to their next production, which will be about Grunwicks, something I saw at first hand.
Posted by Epictetus at 11:14