I have been to see the live broadcast of the RSC's latest production of The Tempest. The focus is very much on the magic and on forgiveness, of oneself as much as of others. I wasn't convinced that any real remorse was being shown by Antonio, but perhaps that's the point (1).  The magic however was paradoxically realistic. When watching these live broadcasts I am often left with the impression that the cinema goer gets a better deal than those in the live audience. On this occasion that probably isn't the case. The extensive special effects, especially Ariel's motion capture suit, were par for the course on the big screen, but I suspect would have been astonishing when seen on the stage. 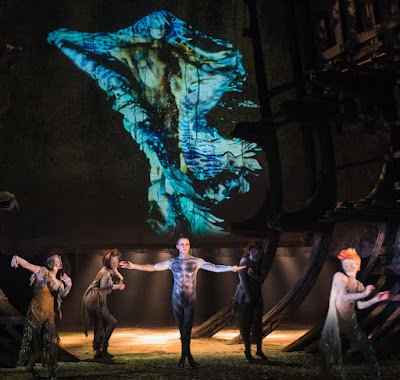 They didn't make much of the political aspects, such as the play as metaphor for colonialism. Perhaps that's a shame. At the time the play was written England (and it was then England and not Britain) was just setting out on establishing a global Empire. And as of today we seem destined to be colonised in our turn. Perhaps a production of Shakespeare's last solo composition in which Caliban represents the English white working class in all their lumpen, unintelligent monstrosity would be very interesting. Subhuman children of the witch indeed (2). For surely what angers Caliban isn't - as it should be - his oppression, but the fact that he is aware - at least subconsciously - of his inadequacies when compared to others, but feels impotent to address them. Oscar Wilde's observation in the preface to 'The Picture of Dorian Gray' has a validity just as relevant to the this century as to his: “The ... dislike of realism is the rage of Caliban seeing his own face in a glass.”


(1) "Then came Peter to him, and said, Lord, how oft shall my brother sin against me, and I forgive him? till seven times? Jesus saith unto him, I say not unto thee, Until seven times: but, Until seventy times seven." - Matthew Chapter 18 Verses 21-22

(2) I'm allowed to say this - I am, by origin and upbringing, as white working class as it is possible to be.
Posted by Epictetus at 22:38