As regular readers know it is my custom to go to all the exhibitions at the Henry Moore Institute and then come out and say how bad they are; basically I just don't like modern art. However, credit where credit is due; I should have reported earlier that I have been very much enjoying the magnificent five metre tall gorilla that has been standing outside the building for the last few weeks. 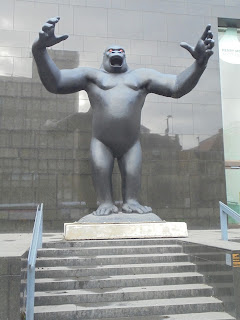 I have now been to see the exhibition of which the beast forms part and and can confirm that virtually all of it is terrible. I must be going soft however because I also quite liked this piece by Nigel Hall, although the photo (taken with the camera which I keep in my manbag for just such occasions) doesn't do it justice (you'll have to take my word for the fact that it appears to float in mid air) and nor can I remember its name. 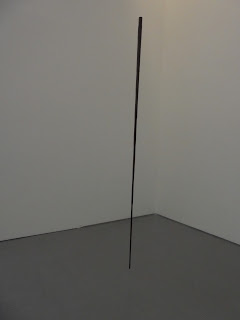 Going back to King Kong (for it is he, sculpted back in the 1970s by Nicholas Monro), the eighth wonder of the world will be on the Headrow for another month or so; well worth a trip.

By the way, neither of those photos is in black and white, which you can verify by enlarging the first and looking at Kong's eyes; it was just a very grey day in Leeds.