I've come to the conclusion that many of the people I play boardgames with are actually pursuing a slightly different hobby to me. Whereas I like playing boardgames for the sake of doing it, they seem to get their kicks from being able to express an opinion on the very latest game to have been released. As with all addictions the buzz they get seems to wear off increasingly quickly as time passes. Hence the fact that I seem to play an awful lot of games only once, with the consequence that it's not uncommon to find one has got the rules wrong, but never to get to try again with the correct interpretation. On the plus side, I never spend any money on buying boardgames, because I know a load of people who spend hundreds a month satisfying their habit . In any event, it's been a bit of a bumper month for playing:

6Nimmt!: Not as arbitrary as people claim, although all the strategic play in the world isn't going to help you if you have a bad hand of cards.

Apples to Apples: Why? Seriously, why?

Celestia: Very entertaining, and doesn't outstay its welcome. There is a rather nice 3D airship from which your meeple can descend if, as is often the case, you don't like the look of the captain.

Codenames: Really good. Now, once again, the game that I have played more than any other.

Codenames: Pictures : I'm really not a fan; the original word based version is so much better.

Colt Express: A bit random, but great fun if played infrequently. Once again the 3D model of the train really adds to the experience.

Crisis: The first time I played this the lack of crisis made it boring. This time the economic circumstances were much harder, but I didn't enjoy it any more really.

Diamant: This is a push-your-luck game, in the mould of Celestia, but inferior. The mechanics of choosing whether to push on or turn back by revealing a card are clumsy when playing with lots of players.

Evolution: Climate: There is supposed to be the threat of crisis here as well, driven in this case by climate change. It never seems to happen though. Still, and also despite the fact that it has very little in common with the way that evolution actually works, this is a very good game.

Finca: I'd never heard of this before. It is about growing vegetables on one of the Balearics and then transporting them to market on a donkey cart; astonishingly it is not the only game that I have played with exactly that theme. I enjoyed it and, having learned about the impact of the set up phase on the functioning of the rondel mechanism, I think I'd do better next time.

Five Tribes: Good game, although the playing mechanics are simpler than those for scoring at the end.

Flamme Rouge: I do enjoy this cycle racing game. One day I shall get one of my team members across the finish line.

Great Western Trail: One of the big games of the moment. In common with Terraforming Mars I can't really see what the fuss is about. Whilst there are various ways of scoring victory points, the purchase of better and better cattle is the one that will always win.

Fuji Flush: I like this, and it works reasonably well with eight players. However, while there is strategy and skill in reducing one's hand to one card - the winner is the first to get rid of all their cards - thereafter luck takes over and the individual can have no effect whatever on whether they win or not. That seems a bit of a design flaw to me.

Kingdomino: Another good game that doesn't play to my strengths. One of these days I shall complete my tile layout without embarrassing gaps in it.

La Granja: No Siesta: This is another of that unexpected rash of games relating to agricultural produce and donkey carts in the Balearics. This is the dice version of the original La Granja; I preferred that with its multi use card system.

Lanterns: This is a short, colourful tile laying game that passes the time very pleasantly.

Mombasa: This was a big game of last year, which I've only just got round to playing and very much enjoyed. It has an interesting mechanic which I would describe - badly - as a card version of the mancala. Of the games new to me this is the one to which I would most like to return. (If anyone can think of a more complicated and less readable way of writing that last sentence please let me know; let's see what the Russian spambots make of that.)

New Angeles: Another game about which there has been much buzz and yet about which I had never heard. It's a semi-cooperative negotiating game, with an element of hidden role. I found the design very clever because there are a variety of reasons, hidden and overt, short term and long term, as to why people would either support or oppose the common objective when each decision is taken. There were four of us (the minimum number), but I came away with the strong impression that it would be best with the full number of six. One warning however, I suspect that a game with that many would take a rather long time. I try to win all the games that I play - there isn't much point otherwise - but after the event I'm normally not bothered as to whether I did or not. However on this occasion I will indulge in a little bit of triumphalism. I didn't just win, I did them all up like kippers. 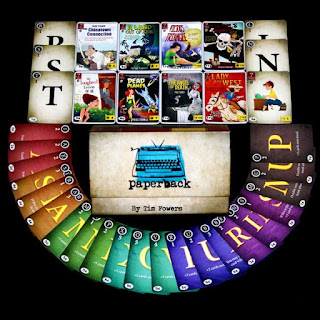 Paperback: As I'm sure I've said before, this is a fun word game.

Perfect Alibi: I'm going to be less boastful about having won this deduction game because it was simply a lucky guess at the point at which I was so bored that I just wanted it to end.

The Prodigals Club: I enjoyed this worker placement game about giving all one's money away and losing one's reputation less than the previous time I had played. possibly that's because with only three players there was less restriction on what one wished to do.

Rattus: Very good game about the plague. I'd like to play this more often.

Stockpile: A fun stock market game with a mechanism that mimics the rise and fall of shares reasonably well.

Thurn and Taxis: A classic Eurogame with the strangest of themes - designing routes for the Bavarian postal service - sitting very loosely on top of some very nice card drafting and set collecting game play.

Ticket to Ride - UK map: This was the first time I've played this map and thought it was very good. Other complained about the new technology/permit element, but I rather liked it. I didn't win, but it all reinforced just what a good game Ticket to Ride is.
Posted by Epictetus at 08:47

Email ThisBlogThis!Share to TwitterShare to FacebookShare to Pinterest
Labels: boardgaming