I am excessively diverted

And so to the theatre. I have been to see LipService Theatre's 'Mr Darcy Loses the Plot', which starts, exactly as one would imagine, as a spoof on Pride and Prejudice , and then spirals off imaginatively. The Cinderella story is reflected throughout Austen's work - Mansfield Park being the most direct version - but even I can't pretend that there is any real link to my previous post. Instead this piece explores the idea that women writers, unlike men, were historically not given the luxury of being able to write full time, but had to also juggle domestic responsibility. So when Austen goes off to attend to her sister Cassandra, Darcy, becoming bored and somewhat unhappy that George Wickham seems to have taken over as romantic lead, wanders off to do his own thing. Surreally, but very amusingly, he turns up as Max de Winter, Daphne du Maurier having been similarly diverted by looking after her family (*). He finds that he prefers this new life, especially the opportunities it affords for outdoor swimming. In a a parallel adventure Wickham himself turns up as the fox in The Tale of Jemima Puddleduck, Beatrix Potter being busy looking after the sheep farm. It's a two woman show which I found to be very funny and very clever; nice programme too. 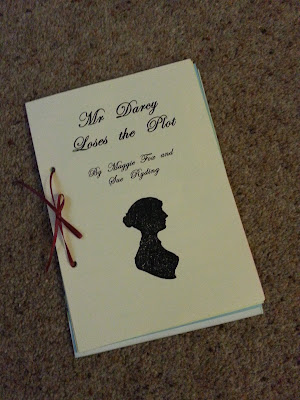 (*) In a desperate attempt to give this blog some much needed wargaming credibility can I point out that du Maurier's husband commanded I Airborne Corps during Operation Market Garden and that it was he who coined the phrase 'a bridge too far'; Dirk Bogarde played him in the film.
Posted by Epictetus at 10:15