Oh, What a Lovely War

Posting has been restricted for a few days, not just because of the two bob bits, but also because of intermittent problems with my broadband. I have finally tracked down the cause of the latter to sun shining on to the router; anyone who has ever lived in the north of England will forgive me for that not having been one of the first things that I thought of.

I have now had the chance to play the newish Great War version of Quartermaster General, and was very impressed. Indeed, I think I preferred it to the original, which is high praise. This game requires precisely five people as opposed to the previous need for exactly six, with players representing Russia, Germany, the Austro Hungarian/Ottoman Empires, France/Italy, and the UK/US. Players representing two participants have one deck of cards - although individual cards are only playable for one force - but separate armies and navies. It is the way these cards are used that makes the difference. Some are played directly from hand and some can be saved for playing later, but each can be used in one of three ways: to cause special events, for carrying out attrition (essentially reducing another player's capabilities, but at a cost to oneself) or for supplying reinforcements to a battle in progress. To succeed the last of these one must have prepared in advance better than one's opponent. The emphasis on planning before acting is what, to me, improves the game. On top of that, the fact that many cards are used other than to cause the special event on them - or simply discarded due to attrition - will surely mean that each game plays out very differently. Our game went the whole way, rare in the original, and resulted in a very narrow victory for the Central Powers notwithstanding the fact that we had run out of cards and could do nothing for the last two turns. Recommended, chaps, highly recommended.

In other WWI news, I have set up the scenery for the second of the Through the Mud and the Blood scenarios: 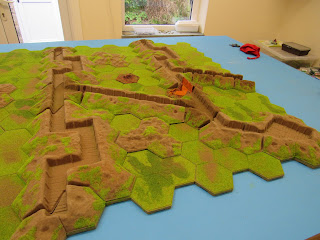 One minor problem with representing trenches in this way is that line of sight isn't as intuitive as it might be. The machine gun pit just visible in the centre of the rear trench actually commands the whole table. Subsequent to taking the photo I laid the forces out and discovered, inevitably, that I didn't have quite enough troops after all. Cue the longbowmen being muscled to one side on the painting table by half a dozen British bombers. I've also had to rush through a couple more Big Man bases.

And to wrap up action here regarding 1914-18, having read Square Bashing I think that they will do nicely as an alternative way of using the same figures at a different level of game. I have therefore ordered some field artillery plus a few sabot bases to check how the infantry will look.
Posted by Epictetus at 15:36

Email ThisBlogThis!Share to TwitterShare to FacebookShare to Pinterest
Labels: boardgaming, Square Bashing, Through the Mud and the Blood, WWI