I've just had a rather disconcerting, but not terribly timely, email from Sainsbury's warning me about the possible presence of salmonella in something which I bought four days ago and ate the following day. I think it's fair to say that I would rather forgo all the bonus nectar points in the world in return for untainted food. However, if this is indeed to be the end of Epictetus then I had better bring things up to date; your grief will only be heightened for not knowing that not only have I been to see the very excellent Dr Bob and the Bluesmakers once again, but that I also won £25 on the Premium Bonds. That should take the edge off a painful death by food poisoning.

Speaking of poisoning, I also saw the latest live broadcast from the National Theatre: Peter Shaffer's Amadeus, a play that takes a Shakespearean approach to the relative importance of historical verisimilitude on the one hand and the dramatic narrative on the other. I've always liked the ironic way in which Shaffer underlined the lesser esteem afforded by posterity to Salieri - and what a performance by Luciani Msamati - compared to Mozart by naming a play in which the former is the main character after the latter. This production  was moving and engaging in a way that the other plays I saw last week most certainly weren't.

I've also been to the seaside, St Annes-on-Sea in fact, improvidently choosing one of the coldest days of the winter for the purpose. I had fish and chips for lunch in the pier café - full name: Cafe on the Pier - at a table overlooking the beach; a cliché I know, but, as I pointed out to the Tofu Lady, one sometimes one just has to let oneself be swept along by the moment. Nearby was this statue, which I photographed with the camera kept in my manbag for just such an opportunity. 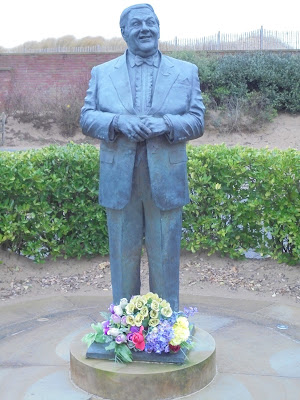 There is no point in having a competition because a quick web-search would identify it for you, but I wonder if many people will immediately recognise who it's supposed to be. The first words that I ever heard my ex-wife say - on our first day at business school - were to explain that although she shared this chap's name she definitely wasn't him (a); and yet I still married her. And on the subject of wives, on our visit to Vapnartak James came up with the hypothesis that the second wives of wargamers are far more sympathetic to their husbands' hobby than first wives. Much of the evidence seems to point in precisely the opposite direction, but I have no current intention of putting it to the test.

As the subject of wargaming has been raised I should report that we had another crack at Blitzkrieg Commander II. We had a better grasp of the rules this time and Peter at least seemed to have worked out how to use them to properly coordinate his attacks. They are certainly quicker than Piquet for handling large numbers of units. I'm not an expert on second world war gaming, but then nor am I that big a fan. The problem seems to be that, in the minds of the rule designers at least, the Germans had by far the best equipment; the implication presumably being that tactical superiority was undermined by strategic over-stretch. That may well be true, but it doesn't always make for a particularly satisfying game on the table.

Anyway, that's as may be; I more pressing matters on my mind, namely imminent diarrhoea, fever and abdominal cramps followed by death. Vale!


(a) This was shortly followed by another student asking if despite his surname being Ogden we would refrain from calling him Hilda. Naturally he has been known as nothing else for the last twenty five years.
Posted by Epictetus at 16:20