I started this blog as someone who didn't wargame, but would like to. As 2018 draws to an end I find myself in much the same position, real life events having conspired to prevent any gaming for the last six weeks or so. Working on the assumption that things will perk up a bit in the New Year I have taken the opportunity to remind myself of what happened this year. Despite the weather (unusually bad at the beginning and astonishingly hot in the middle) I played or umpired twenty one games, many of which ran over two or even three evenings. Details - and these may not be entirely accurate, but they're the best I could come up with - are:


The split by period is interesting and anyone who reads James' blog will notice the correlation with what he has been painting and building. Notably there was no Romans vs Celts, Wars of the Roses or 20th Century. I'm not complaining - if the god of wargaming decided to limit me to one period I would always choose Horse & Musket - but that's a lot of unused toys. I have had a game set up in the annexe for a while now, just crying out for a solo run through to alleviate the lack of games elsewhere; which needless to say I haven't done, although I have tinkered with the layout. Here's what it currently looks like: 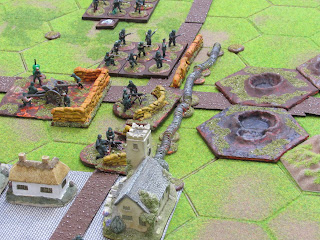 It also demonstrates that much of my painting this year has been producing extra WWI figures and terrain to provide the forces for a game of Square Bashing; still no tanks though. And for anyone remembering my promise to spend some of my recent windfall on wargaming, I haven't yet done so.

I wandered away from boardgaming during the year, and then towards the end edged back towards it a bit. Boardgamegeek tells me that I played 65 different games a total of 89 times, which feels about right. The one game from that lot which I would recommend to the blog's target audience of wargamers is Medieval, a game whose tagline of 'Wage war, unleash the plague, excommunicate the unworthy, and drive back the Mongol hordes' is right up our street I think. My own experience of Quartermaster General: The Cold War with six players wasn't very good, but others whose judgement I trust confirm my impression that with three players it would be excellent.