When this lousy war is over

I have recently attended a number of what I have heard described as solemnities held to commemorate the centenary of the end of the Great War.

I saw the BBC Philharmonic plus several massed choirs perform Britten's 'War Requiem'. It's a piece arising out of the second, even greater, conflict (it was commissioned for the consecration of the new Coventry Cathedral, built to replace that destroyed by the Luftwaffe on the night of 14th November 1940), but which alongside the traditional Latin of the mass also sets a number of Wilfred Owen's poems (including this one). The work - immensely moving it goes without saying - is about reconciliation as well as suffering and perhaps sits out of place in today's world. One sign that nothing ever changes is that Britten wrote the vocal parts for specific performers from the UK, Germany and the Soviet Union as an indication of the international nature of what was being remembered, but the Russian soprano was denied a visa and couldn't take part.

An excerpt from Britten's music and Owen's words also feature in 'Last Days', a work which took us from the heady days of early 20th century night club life through the start of the war to its terrible consequences. Other poets, both of the war and otherwise, feature along with prose writers and the music ranges from popular song, via Poulenc, Debussy etc to Arnold Schoenberg, who thus made a quicker return to my listening pleasure than I was expecting. The outbreak of war was symbolised by the cast donning uniform and I got a close up view of how puttees are wound and tied, something which it had never occurred to me to worry about before; and it was all the more impressive because the chap doing it was singing his heart out at the time. The female singers adopted nurses' uniforms and some of the reading was from Helen Zenna Smith's 'Not So Quiet', a book which was clearly also a major source for 'Not Such Quiet Girls', a story of women ambulance drivers on the Western Front. A mixture of drama and music (mostly relentlessly cheerful patriotic concert hall songs of the time) this explored the growing independence of women thrust into the horrors and personal dangers of war from comfortable, respectable backgrounds and their dilemma when asked to give it up when the Armistice came. It was powerful stuff, and the (true) subplot about same-sex relationships felt a valid reflection of the times rather than a twenty-first century add-on. 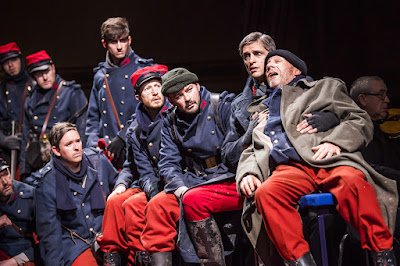 Which brings us to the opera 'Silent Night', a fairly recent work by Kevin Puts about the well known Christmas truce in 1914. Without repeating the word 'moving' yet again I am left a bit lost; because that's what it was. With the chorus split into and dressed as German, British and French troops the story was told through several individuals who embraced the twin ideas of war and peace in different ways, but seemed to suffer the same consequences regardless. Like a number of reviewers I had my doubts about Mark Campbell's libretto which seemed to introduce greater and greater implausibilities as time went on into a narrative whose intrinsic unlikeliness didn't seem to me to need any embellishment. The music though was lovely. I recently reported seeing bagpipes at a gig, and here they were in an opera too, as was a harmonica, another couple of firsts for me. The semi-staged production was nicely judged and included a marvellous coup de théâtre near the beginning that brought the whole hall to a still silence of slightly bewildered anticipation.

This is, for now at least, the end of Great War commemorations in this blog. Let's finish with some poetry, not from the usual suspects this time, but from e.e. cummings: