I have always taken the view that as a wargamer one is in no position to mock other people's hobbies. However, as a long time member of the Richard III Society (which I joined at time of the quincentenary of Bosworth) I have always felt able to chuckle at the foibles of the membership. This has become harder as the research into events of 1485 led first to the discovery of the Bosworth battlefield and then to the almost unbelievable finding of the man himself. I was beginning to think that things were moving in the direction of solving the biggest mystery of them all, but perhaps instead the cranks are making a comeback. 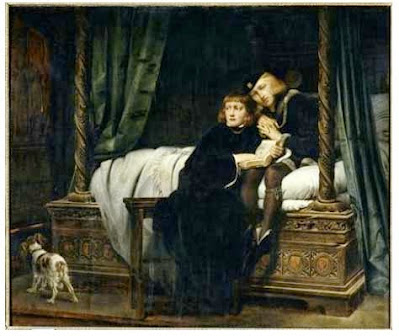 This blog has shown the above painting ('Edward's Children' by Paul Delaroche) before, when mentioning the interesting, though possibly speculative, theory that it was the dog which was responsible for murdering the princes in the Tower. This quarter's Ricardian magazine has an equally conjectural piece drawing attention to both the colours of the drapery and the carvings on the bedposts. These, asserts the author, mean that Delaroche wanted to indicate that the princes had survived into the reign of Henry VII and been done away with on his orders; why he didn't just say that or show their evil brother-in-law in some more overt way isn't explained. Nor is the possibility considered that he simply painted from life and oldish looking bed and it never occurred to him that it was from the time of the next dynasty.

The Ricardian magazine is full of this sort of stuff (in fairness they also produce a more learned annual journal) and well worth reading even if the only result is to make you shake your head at the thought of otherwise sensible people spending their time and money in this way. Also in the current issue is the revelation that Richard de la Pole, la Rose blanche, was a bit of a tightwad and an article on Elizabeth 'Jane' Shore, mistress of Edward IV and god only knows who else, which ably demonstrates that she was your bloggist's sort of woman and no mistake. 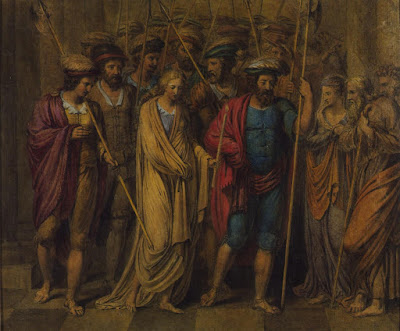 After the death of Edward she was made to do penance for her carryings-on by Good King Richard, a scene later somewhat freely interpreted by William Blake in the painting above. Blake himself was of course a firm believer in free love (sources differ as to whether this was from political or religious conviction, but there seems to be a consensus that Mrs Blake took a dim view of the idea in any case) and was widely regarded as mad during his lifetime.