I managed at last to see the latest film version of 'Journey's End', which when released last year came and went in Leeds so quickly that even a gentleman of leisure such as myself was unable to catch it. The local arts centre has recently shown it as part of the Great War centenary commemorations (of which more soon in a remarkably untimely post even for this blog) and I can report that it was well worth watching. The play, which I have seen a couple of times; most recently earlier this year, takes place in a bunker in the trenches and I wondered how they would open out the action  for the cinema. It turned out that Sherriff had co-written a novelisation following the great success of the play (which featured a 21 year old Laurence Olivier in the lead role for its first performance) and I assume that helped in the process. The play's strength comes not just from the writer's undoubted skill (he was later nominated for an Oscar for the screenplay for 'Goodbye Mr Chips', and perhaps more pertinently for readers of this blog, he wrote the script for 'The Dam Busters'), but because he has served in the trenches as an officer himself. The incidents, characters and dialogue which he shows us were all drawn from life, and of course, from death. It is no wonder that later writers have drawn on his work so extensively. To take just example, the jokes in 'Blackadder Goes Forth' regarding Baldrick's cooking owe a direct debt to very similar lines in 'Journey's End'. The film's treatment of the scenes outside the dugout such as the trench raid, which in the stage play obviously happens offstage, mixed the detailed (the party crawling along the sap trench to their jumping off point) with the impressionistic (the quick editing used to convey the confusion and speed whilst they are in no-mans land) to great effect. I think it a credit to all involved that despite knowing exactly what was going to happen I found it immensely moving nonetheless. 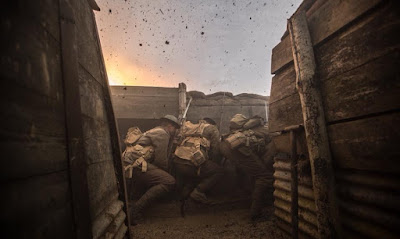 I also saw 'The White Carnation', a somewhat lighter play written by Sherriff in the early fifties. It's basically a ghost story set at Christmas about redemption through change; you know the sort of thing. However there is a very funny subtext concerning the reaction of local and central government, who view the whole thing in terms of bureaucratic inconvenience. In a very prescient exchange the man from the Home Office tells the ghost that his rights as a British citizen ended with his death and gives him notice to leave the country immediately. In response the ghost threatens not only to haunt the civil servant himself and his family for several generations, but also to haunt the House of Commons and throw the entire government of the country into chaos. For some reason that got the loudest laugh of the evening and a spontaneous round of applause.
Posted by Epictetus at 11:23