A very pleasant complaint for a man in London

"Never go on trips with anyone you do not love." - Ernest Hemingway

I have been to London again (it rained) and have to report that Virgin East Coast managed to maintain their 100% record of delayed or cancelled trains when I travel with them. The excuse yesterday seemed to vary between an 'incident on the line' (a sad euphemism for such a tragic human story I always think) to Kings Cross having been evacuated due to the arrest of a man with a gun. Now I was actually on the concourse at the time of this supposed police action and I saw nothing; which on reflection possibly says more about my powers of observation than anything else.

I made the trip to meet with a group of bankers. It seems that they had advanced a large sum of money to someone. let's call him Jack, for the purpose of buying some magic beans and had taken as security a charge over the beanstalk that Jack intended to grow. They now find that there is no money, no beanstalk and, for all intents and purposes, no Jack. Another triumph for the banking system. 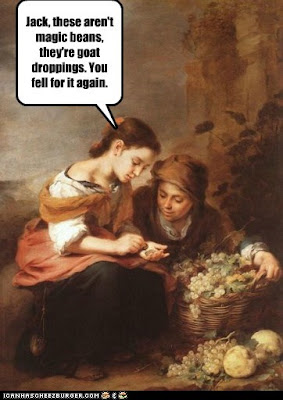 Speaking of London, I have recently got to know someone living in West Yorkshire who, at the age of 42, has astonishingly never been there. It may be for the best though; my friend - a non-drinking vegetarian whose main hobbies are knitting and growing vegetables - is very innocent and has led a sheltered life. Some people are just not ready to be exposed to the sort of goings on that one finds in the big smoke.