To prove a villain

And so to the theatre. "Thank God," you all cry "five days wargaming in a row is not why we read this blog". That begs several questions, but we shall ignore them and plough on; and at least it's a play about a soldier. Accompanied once more by the elder Miss Epictetus - the younger Miss Epictetus does exist, but is far too cool to be seen in the company of her aged parent - I have been to the West Yorkshire Playhouse to see Reece Dinsdale give his Richard III. 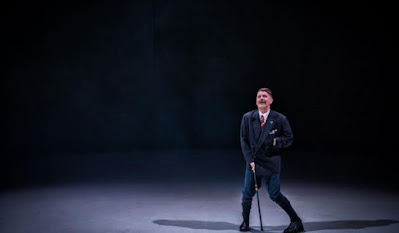 The last time I saw him was in the same theatre last year where he played Alan Bennett. In a sense he is again playing another familiar character - although, unlike Bennett, this one is thankfully dead - because his Richard is quite clearly Hitler. As the Guardian review points out "in the early 1930s, the British press often made fun of Hitler, misled by his appearance into believing that he posed no real threat" and Dinsdale produces more than a few moments of real laugh-out-loud humour. I was wondering what his performance reminded me of, but I think that Jo Haywood has it right in the Yorkshire Life review: he's channelling Leonard Rossiter. Imagine a serial-killing Rigsby only using one arm and wearing one built up shoe and you're there. The WYP seems to be having a season of shoe based disability productions. In 'The Glass Menagerie' the actress represented lameness by only wearing one shoe wile the rest of the cast wore none. That felt crass, frankly walking with a limp would have sufficed, but Richard does need a bit more visible deformity.

The Richard as fascist dictator theme is not new - the last modern dress version that I saw was Sir Ian McKellen's iconic production twenty five years ago at the National Theatre where he played the part as Moseley - but that's because it works very well. So too does the stark stage design and the sound effects and intermittent background music. Less happy is having parts of the dialogue literally telephoned in from offstage, and some of the doubling up of parts caused a little confusion. Overall though it provided an excellent finale to my late summer and autumn of Shakespeare.
Posted by Epictetus at 13:28