I played Memoir '44 for the first time last night, I have played both C&C Ancients and C&C Napoleonic before, so it was easy to pick up the rules, but more difficult to ignore things that are in the others, but not in this one. In particular I was thrown by the lack of opportunity for response by the defender during close assault. 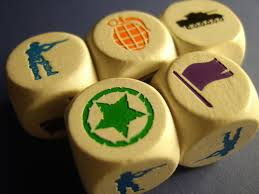 We played the Operation Cobra scenario through twice and I won both times. I have to concede that my victory as the Germans was due to rather fortunate dice rolling on my part plus some aggressive (optimistic?) play by my opponent. I continue to be impressed by the simplicity and elegance of the C&C dice system, but this was my least favourite of the three iterations that I have tried. However, I I've only scratched the surface of the game and until I've tried all the elements - this scenario had no artillery for example - I reserve the right to revise my opinion. It could of course simply be that this was the first time I'd played with the boardgame pieces rather than with figures on a table top and that I was biased against the aesthetics; doubly so because Memoir '44 uses unpainted figures rather than blocks. Once again I instinctively felt that equal victory points is not at all appropriate; surely the Americans should be able to lose more troops and still win?

One small parochial reference if I may. One of the thrusts of Operation Cobra was towards Coutances, one of the twin towns of Ilkley, epicentre of wargaming in the Lower Wharfe Valley. Indeed the road out of Ilkley towards Otley is Coutances Way.