From Rameses II to Henry V

I don't know if anyone else ever takes any MOOCs. I've got into the habit of watching a video or two while I'm having a cup of coffee and a slice of home-made cake (this week's is Pear & Chocolate Loaf and is rather good, even if I say so myself; if you follow the recipe add a heaped teaspoonful of baking powder) and am finding them all very interesting. Obviously as a wargamer what one really needs is constant temptation to start up yet another period and MOOCs provide a steady stream of possibilities to be enthused over and then discarded when something better comes along. For example, I've just completed a short course on the ancient Near East which included much material on Kadesh plus the fighting techniques of the combatants. I hope that my willpower is strong enough to resist the lure of the massed chariots of Rameses II, but the best way to ensure that is so is by quickly moving on. It being October 2015 then where better to go next than Agincourt, and so I'm going to be taking a look here at a brief course being led by Professor Ann Curry to mark the 600th anniversary. 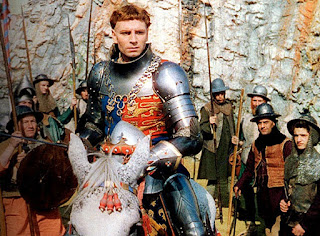