I very much admire those blogs where regular progress reports are provided of what has been painted. No similar update is provided here simply because nothing much ever seems to get painted. However, I am happy to report that the dozen Hamian archers and the Celtic chariot have finally been based - the painting was largely finished some time ago - and their place has been taken in the cupboard by another dozen Hamian archers. The cupboard in question is the one in which the painting tray spends the vast majority of its life; it's actually beneath the boiler so I pretend to myself that it is in some way a sort of extended drying process. 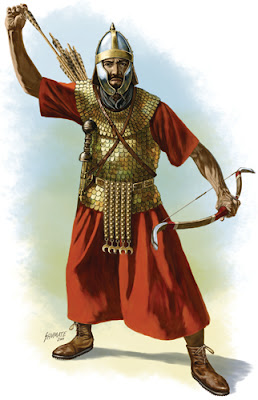 The archers in question are a mish-mash of Roman bowmen from various manufacturers. Many of their colleagues have been converted to Ottoman forces to serve at the siege of Constantinople, but those remaining have been dragged from the plastic mountain to give some variety to To the Strongest! battles. They are Hamians mainly because that's what's pictured on Plate A of Osprey Men-at-Arms 93 'The Roman Army from Hadrian to Constantine' (not the picture above by the way which was lifted from here). Extremely rudimentary research on my part (although not Wikipedia on this occasion) indicates that one theory has them in Britain as hunters, whose main role was to provide meat and game to other troops. That suggest a possible use for them in the Romans in Britain rip-off of Pony Wars, for which I am keen to develop a hex based variant. And finally, on the subject of Hexon, I have bought some more.
Posted by Epictetus at 16:44

Email ThisBlogThis!Share to TwitterShare to FacebookShare to Pinterest
Labels: conversions, Hexon, Romans, To the Strongest!