I had set up the C&C Ligny scenario mainly to see how it looked, but we ended up playing it last night.
The terrain is very robust despite not being clipped together as thoroughly as recommended by the manufacturer. The video on their website makes it look so easy, but it's really not; I gave up after pinging the clips around the annexe on several occasions. The fact that the hexes were smaller than the previous squexes not only made it look more cramped, but also made the players imagine there was less room for manouevre as well. I suppose we'll get used to it. 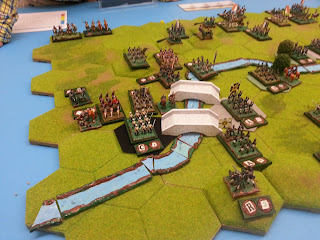 For the record, James' peculiar aversion to combined arms attacks resulted in a straightforward Prussian victory.
Posted by Epictetus at 14:41