And so to the opera. English Touring Opera are presenting three works in Harrogate. I passed on Massenet's Werther, mainly because the eponymous protagonist is so insufferable, but also partly because I made the mistake of going to see the very disappointing Spectre instead. But I did catch Debussy's version of Maeterlinck's 1893 play. I always welcome the chance to see opera in a smaller theatre and musically and vocally it was very good. The stage designs are necessarily built around transportability, but I felt they worked less well. The window in the castle tower wasn't really high enough or big enough for the Rapunzel style hair letting down and then there was the filing cabinet which lay on its side centre stage throughout. The opening and closing of various drawers to represent wells, caves, gardens etc sort of worked until late in the second half, when the top drawer was opened for the first time and a pile of papers spilled out. It was impossible to tell whether they represented anything in particular or whether someone had just forgotten to take them out. 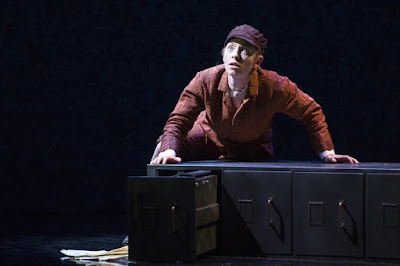 And what things represent is rather important here. The original play was 'symbolist'; in other words everything has a deeper meaning than that being acted out in front of us. I think - and don't quote me on this - that this one's about some things ending and other things beginning, whether we want that to happen or not. I saw echoes of Tennyson's views on the death of Arthur and the end of Camelot ("The old order changeth, yielding place to new"). Maybe that's all tied up with the mock medieval setting; maybe I'm just talking drivel. From our modern perspective it's always tempting to assume that fin de siècle (both temporally and artistically) implied some sort of intuitive awareness of the onrushing global conflict. 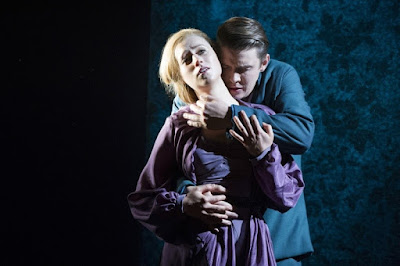 Whatever, I actually prefer to draw my lessons from the story as told on stage rather than looking behind it. The recital of infidelity and jealousy provides an interesting juxtaposition with both The Winter's Tale, seen on the same stage recently, and, once again against a background of impending and inevitable social change, the contemporaneous Uncle Vanya. For me, there are two pivotal moments: when the adulterous lovers first acknowledge how deep their feelings for each other are and understand that they are reciprocated; and then, when perhaps inevitably they are discovered and await whatever fate will bring, Pelléas cries "All is lost, all is won".
Posted by Epictetus at 10:12