The whole vibe of everything

I'm going to try to avoid abuse for not being sufficiently appreciative of Elkie Brooks by sneaking mention of it in with a load of other stuff. In fact I seem to have also overlooked having seen Gilmore and Roberts recently. I rather liked them, make your own mind up:


The wargaming annexe was unaffected by the floods in Otley. The houses that ended up underwater were those that have a view of the river rather than of the A659 as the Casa Epictetus offers. The weather did disrupt travel somewhat, but nevertheless I made it to Leeds Art Gallery for British Art Show 8, a touring exhibition that takes place once every five years and which hasn't been to Leeds for twenty five years, or a generation as the publicity rather portentously says. Featuring forty two up-and-coming British Artists, it was mostly a load of old pony, with the only piece to which I would have given house room being 'On Nom Ore', a large hand-tufted wool wall hanging by Caroline Achaintre, that was so big that in fact I don't have enough room in my house after all. I chose the particular day that I went partly because it was when certain works were being interpreted in the galleries through the medium of music and dance by local students. This did not make things any better. 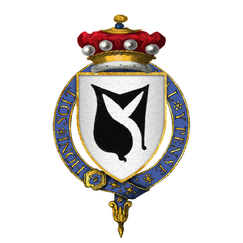 An unlikely and serendipitous result from the trip was that one exhibit, Linder's 'Diagram of Love: Marriage of Eyes' (literally a piece of old carpet that the artist found somewhere), made me realise what the device on Hastings' flag was meant to represent. That would be the first Baron Hastings, who has featured in all of my many refights of Tewkesbury and who has caused me every time to think "What on earth is that meant to be?". No doubt you already knew and are mocking me now; so be it.

Which brings us to Elkie Brooks. She was excellent. I can say no more.