With all due apologies to Crumb it's time for some more wargaming. As previously mentioned I bought some of Kallistra's Hexon II at Fiasco. I suppose my main intention is to use it to build terrain flexibly for all rule sets rather than use it specifically for hex based rules. However, I haven't bought a lot so far, partly because I don't have a terribly good visual imagination and wanted to experiment before I commit to what elements to buy, and partly because I had travelled into Leeds on the bus and couldn't actually carry very much. In fact the box I bought was somewhat trickier to carry than I had anticipated and I ended up walking through Leeds a bit like George Lazenby in the old Fry's chocolate adverts. 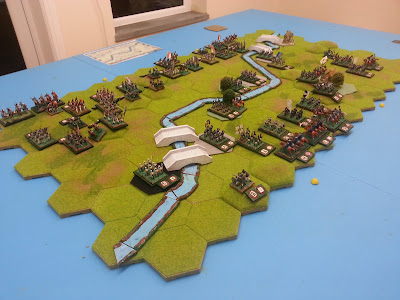 Anyway, notwithstanding my ultimate intentions I have set up the boards that I currently have for C&C Napoleonics; it's the Ligny scenario. It all looks a bit lost in the middle of the table, although there will be plenty of room to put the rules and fizzy drinks, and to roll the dice. The whole thing has now clearly abandoned any pretence to be a wargame and stands proud as a more aesthetically pleasing boardgame. 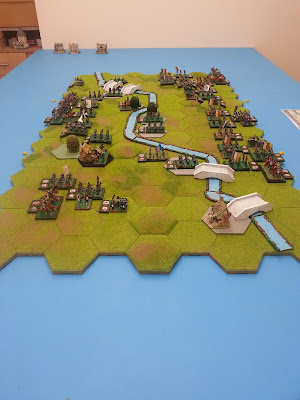