I popped in to the WWI gaming day held at the Royal Armouries on Saturday. It wasn't worth a special trip to Leeds, but I think more than justified the ten minute stroll from the city centre if one was there anyway. In fact I spent about an hour at the show playing a couple of participation games and chatting to a few of the demonstrators. Naturally I forgot to take a camera. There were eight games in all including the Jutland game that was at Fiasco, a Wings of War game and a large game by Leeds Wargaming Club that didn't seem to involve any contact between the two sides while I was watching. I had a crack at Villers- Bretonneux (the first tank on tank battle in history), where I routed the Boche with a lucky throw, and a sort of Steampunk take on naval clashes on Lake Tangayanika, in which I routed the Boche with a lucky card draw.

My own WWI gaming exploits continue although I haven't yet got a handle on successful tactics. The photo below has nothing to do with the scenario, instead it's just to see how my new barbed wire looks on the table. 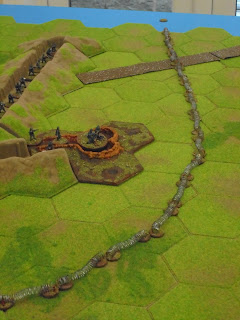 Email ThisBlogThis!Share to TwitterShare to FacebookShare to Pinterest
Labels: shows, Through the Mud and the Blood, wargaming annexe, WWI