The truth in masquerade

"I have always loved truth so passionately that I have often resorted to lying as a way of introducing it into the minds which were ignorant of its charms." - Giacomo Casanova 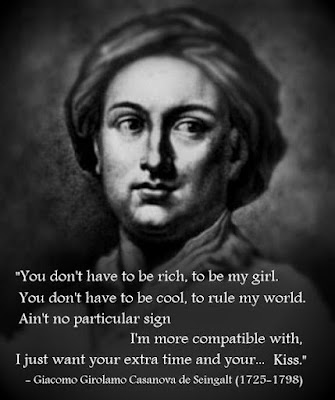 One or two questions have been raised about the Jackson C. Frank anecdote in the previous post. In response I would firstly say that it seemed to me to be one of those stories which is too good to check, and secondly that I have on a number of occasions pointed out that one would be wise not to take everything that appears here at face value.

And that's a moral that also applies elsewhere. One of my so-called rivals in the world of wargames blogs has, by who knows what photoshop trickery, published a picture which seems to show me using my phone whilst a wargame is in progress, with the implication that I am engaged in some alternative and reprehensible activity instead of focussing on the game. You can be comforted therefore, gentle readers, when I reassure you that I have a hobby that I take very seriously, work at assiduously, give all the attention that it deserves and at which I am very successful.

Anyway, back to wargaming. The game this week is at my house and I don't think it's worth doing any more WWI stuff until we've played this first scenario through and can see where it all may or may not be going. Painting action has therefore moved to ancients, where spurred on by recent To the Strongest! games I am finishing the loss markers for Celts and Romans and painting up a few Newline Celtic slingers, despite the fact that I already have more than the maximum that can be fielded. It's the only way.
Posted by Epictetus at 15:29