And so to the wargaming table. I can pretend no longer that I don't play with toy soldiers and so need to report on activity in both the annexe and the legendary wargames room. In the latter we have spent a couple of weeks having another stab at Trebia using To the Strongest!. James tweaked the scenario and it worked much better, although the Romans are still somewhat up against it. That is of course historical, and we got a more or less historical result with much of the Roman infantry getting away, but a large number of their allies not doing so. Very unusually the elephants were still there at the end.

I continue to enjoy the rules, although rather embarrassingly we didn't play it right in either sense of the word. Despite having played a fair number of times before and James being a confidante of the author, we got a couple of important rules wrong. Commanders died twice as often as they should have - they play a role in the initiative part of the game so that's quite a big deal - and we allowed skirmishers to pin formed units, which they can't. On top of that I still don't think we have the tactics sorted out yet. The Carthaginians had significant cavalry supremacy, but instead of just riding over the Romans I tried a series of ambitious manoeuvres that would be too complicated if performed as part of Trooping the Colour and which achieved nothing. The main issue however, in my opinion at least, is that we never pull units back from combat in order to rally them. One assumes this is what should be done because a) there are no support bonuses in melee and b) it is easier to rally if you can't be charged. Add to that the fact that withdrawal will also require the enemy unit previously in contact to activate twice if it wishes to attack again then it seems the logical thing to do. But we don't. 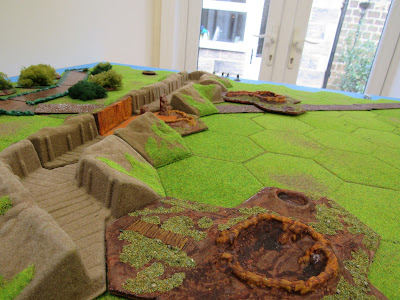 In the annexe the latest solo run through of the trench raid scenario ended with the Germans running away before the British got anywhere close. I've probably squeezed as much as I can out of running through it myself. We're going to have a try next week, and hopefully with more player input all will become clearer. Blinds are an important mechanism in the game and they're difficult to deal with if you know what both sides are doing. I have knocked up another couple of machine gun posts in order to give the Germans a choice of where to put things and the latest layout of their trench can be seen above. If I have a reservation about the scenario it is the worry that it might turn into a long range duel between the the two machine guns. Perhaps, in a Sidi Rezegh stylee, the British must be obligated to just get on with it. 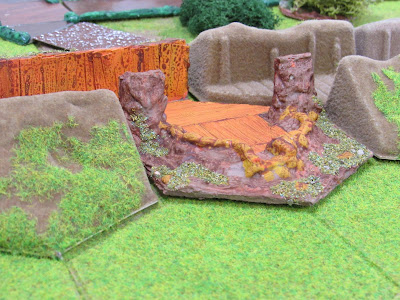 Email ThisBlogThis!Share to TwitterShare to FacebookShare to Pinterest
Labels: elephants, game reports, Punic Wars, Through the Mud and the Blood, To the Strongest!, WWI