Not much happening at the Casa Epictetus, which is mainly my own fault, coupled of course with all the rain and cold going on outside that has caused me to dig out the scarf that the big bouncy woman kindly knitted for me. Still, one expects things to improve. As a man with an accent that was apparently supposed to resemble mine once said:


"Winds in the east, mist coming in.
Like somethin' is brewin' and bout to begin."

James has now posted a review of his game at Fiasco! (and is it me or is one of the reader comments somewhat unrelated to reality?). I note that he doesn't mention how one sided the game was. The useful things that I picked up at the show were obviously the extra Hexon terrain plus the revelation that my washing machine has a 14 minute cycle; who knew? What I forgot to buy were some bases to mount heavy weapons - despite actually going to the Warbases stand to take a look - but the mail order that followed swiftly when I got home has now arrived .This has in turn led to some painting, and indeed modelling. I have made some barbed wire, with which I am rather pleased and which will no doubt feature in photographs soon. I have also painted up a Vickers HMG with which I am rather less pleased. There are two things wrong with it, above and beyond my painting abilities. The first I will leave to see if anyone spots; I think I must have spaced out on the glue fumes whilst putting it together. The second is far harder to notice, but for some reason annoys me a lot more. The chap firing has only got one arm. He definitely had two when I started out, but he's only got one now. 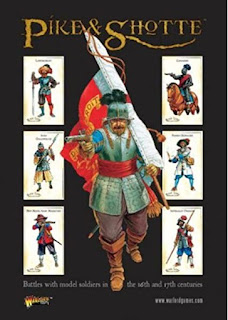 I have read through the Pike & Shotte rules several times, although I'm not sure how much I am going to retain. They really are poorly laid out. Fortunately I only had to read about half the book  because the rest is padding - army lists and general uninformative waffle about various historical periods. Given how many large photographs there are I would guess that you could get all the rules on less than a dozen sides of A4 if one really tried.