I have a couple of solo attempts of To the Mud and the Blood, taking the scenario which was set up in the annexe through various stages. The first attempt was just to make sure that I understood the flow of each turn, which naturally I didn't. I got particularly distracted along the way by trying to work out the best way to use blinds in the context where one is playing both sides (hint: it isn't to ignore the concept completely).


The second, having reset it all and started again to take account of what had been learned first time round, took me up to the point of doing some actual spotting and firing. What I found out here must have been similar - in a strictly non-lethal way of course - to the insight that commanders gained abruptly when automatic weapons were first introduced to the battlefield. I moved the chaps forward as I had done in countless horse and musket games ready to initiate a firefight, only to find them relentlessly mown down by machine gun fire before they had a chance to do anything of the sort. The moral of which is that the rules encourage coordination of troops, appropriate use of terrain and taking cover for good reasons.

I've now gone back to the beginning, with an amended trench layout and will have another solo bash in due course. 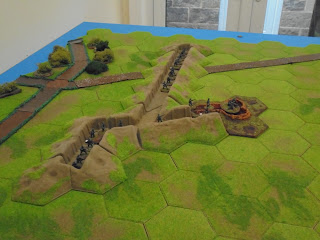 Email ThisBlogThis!Share to TwitterShare to FacebookShare to Pinterest
Labels: game reports, Through the Mud and the Blood, wargaming annexe, WWI