Still playing with myself

I've been having another go at teaching myself Through the Mud and the Blood. I'm sort of getting the hang of it, although I think it will be much easier with another couple of pairs of eyes to remember things such as checking to see if automatic weapons have jammed. This time the British managed to avoid being machine gun fodder, and at the point I've paused it are ready to rush the German lines. 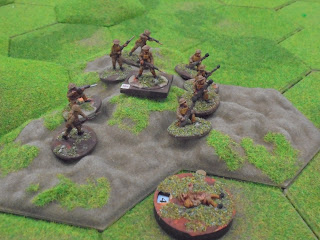 The rifle grenadiers deployed and immediately took four shock, reducing their number of firing dice by two. As I had forgotten that for their first round of fire they halve their dice anyway, this left them with not many - one to be precise - with which to try to suppress the German HMG. 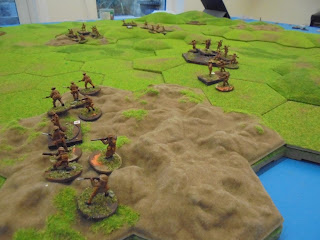 All the British sections are now deployed. The Lewis gun and MG08 have both jammed, but rifle fire - and some rather flukey dice - has killed the entire HMG section leaving the way open for an advance.

I'm enjoying it, but the rules are as badly written as Pike & Shotte. Important points are dotted all over the place and many terms (e.g. cover, turn, dice) are used very ambiguously. However, movement and ranged combat - haven't tried hand-to-hand yet - are all very straightforward once you get going.
Posted by Epictetus at 16:17

Email ThisBlogThis!Share to TwitterShare to FacebookShare to Pinterest
Labels: Through the Mud and the Blood, wargaming annexe, WWI