The lower Wharfe valley's well-oiled wargaming machine has sprung back into action after a short outbreak of real life. We rendezvoused in the wargaming annexe for a run through the second scenario from the Two Fat Lardies' Stout Hearts and Rude Acronyms. It is a bit of a point of principle that we should leave sufficient time between games of the same rules for the details of said rules to be forgotten; and so it proved. We had to have a bit of a do over following the first exchange of fire because we got it completely wrong. Still, I at least am the sort of sad person that gets enjoyment from puzzling my way through the ambiguities and omissions of the average ruleset, which is helpful because in this case the early scenarios are designed precisely with that in mind and lack a certain something as games; balance for example. 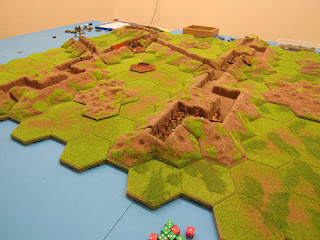 I forgot to take any photos so the one above is the position at the end. The British have gained the first trench and despite taking heavy casualties from the heavy machine gun have defeated the defenders in melee. By that point sheer weight of numbers meant that the Germans had no chance and so we called it a night. We did, I think, increase our understanding of both rules and tactics and a couple of elements came into play that hadn't when we had tried the first scenario, specifically hand grenades and close combat. I think we almost got the latter one right. We are also edging towards our first house rule; none of us care for the everything can fire on the Snifter card. I'm leaning towards two such cards and when the second is drawn that's it, turn over.

It will of course be a while before we can try that out. Firstly of course we have to let all understanding of the rules fade from our memories. But in addition the third scenario in the book requires a village of eight houses, of which I currently have, in round numbers, none. Peter and James are very keen to spend my time and money on acquiring some, but I have my reservations. Anyway, no imminent decision is required: there's a rumoured revisit to Sidi Rezegh (supposedly a different day of the battle to last time) using Blitzkrieg Commander two and a half, and I myself shall be turning my attention to the latest C&C Napoleonic expansion.

Email ThisBlogThis!Share to TwitterShare to FacebookShare to Pinterest
Labels: Blitzkrieg Commander, C&C, Through the Mud and the Blood, wargaming annexe, WWI