Verona brags of him

And so to the theatre. After one play that ends badly the best thing is to quickly move on to another. I have been to the second production of Romeo and Juliet that I have seen since making a visit to Verona last year. It was, as seems to be the case with everything at the moment, set in the present day, with the actors engaging with social media on stage while their various tweets and status updates were projected behind them. I came prepared to be annoyed, but actually it worked very well. Also not particularly unusual at the moment there was some switching of genders; I saw a male Helena in the Dream at the Globe last year and am looking forwards to Tamsin Greig's Malvolio. Here we were treated to a female Friar, Gregory, Benvolio and Balthasar, the last two spending much of their time snogging for no discernible reason. Less effective was the idea of the clash between the two houses  - both alike in dignity you will recall - being something to do with a 'venture capital takeover battle', a fairly similar meaning phrase I think. 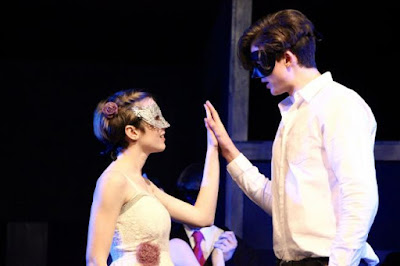 The mostly young cast gave a good account of themselves with the dancing in the Capulet feast scene and the physicality of the fight scenes both being noteworthy. Romeo was out acted by both Mercutio and Tybalt as often seems to happen and while Juliet was very easy on the eye her blank verse was nothing to write home about.  One surprise for me was a man last seen in this blog asking me a pub quiz question about Dangermouse - which my inability to answer resulted in me not winning a couple of hundred quid - turning up as the prince.

So, overall I enjoyed it and thought the director did a good job, although there is one area where I must dissent. In her programme notes she asserts that "this is a tragedy about the dangers of being a working parent...". It isn't.
Posted by Epictetus at 19:48