And so to the theatre. I have been to see Dyad Production's one woman play 'Jane Eyre: An Autobiography', which is, incidentally, the original name under which the novel was published. Rebecca Vaughan's performance is mesmerising. Dressed as the adult Jane she plays all the parts in the whole story with no props except a couch and a glass of brandy. Her Rochester is if anything better than her representation of his governess and the voices of all the other characters are distinctive and appropriate. 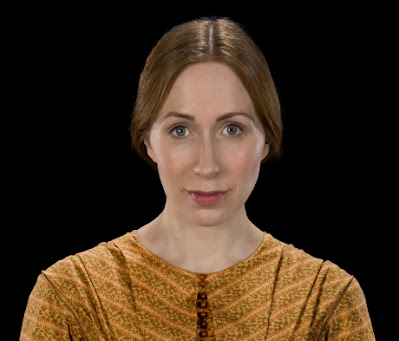 The story is, as it always has been, decidedly odd, which is a euphemism for unbelievable. It's not Miss Eyre's behaviour which is at issue (assuming that she is a reliable narrator;  a question which is outside my pay grade), but that of the master of Thornfield Hall. He behaves extremely badly to the woman he eventually claims to be in love with, including parading another, more beautiful and more suitable, woman in front of her, and dressing up as an old gypsy woman himself in order to trick her.

None of which comes close to the biggest of his problems which is (spoiler alert, but surely you already know this) that he's already wed to the madwoman that he keeps in the attic.

And yet, reader, she married him.
Posted by Epictetus at 16:07