I can assure readers that they are not the only ones who wish that there was more wargaming on here (I exclude the big, bouncy woman from that; I don't think she bothers to read those posts). However, recently the only hobby activity undertaken has been a bit of desultory painting and the scheduling of a smoke barrage for Sidi Rezegh: the Prequel. I think I've put it in the right place, but all I've got to work with is an upside down map and a photo in which my own forces are in focus, but the opposition are not. I appreciate that Rommel - I rolled high and am the Germans - also operated with less than perfect information, but then again he knew what he was doing.

So instead let me write about Albert Lee, whom I have been to see. The last time I saw him he was in Bill Wyman's backing band and the time before that he was with Hogan's Heroes. Now he is fronting his own small but excellent group, which unexpectedly includes Genghis Khan's more affable twin brother on honky tonk piano and occasional accordion. Lee of course has been influenced more by the country music end of the rock and roll spectrum (he had a decades long musical association with the Everly Brothers) rather than the blues end (although he also played with Clapton). The songs played reflected that, being associated with performers such as Carl Perkins, Gram Parsons and Emmylou Harris. It's not news that he is a sensational guitarist, but what amazes me - admittedly as a non-musician myself - is that he does it all unaided. At a time when every wannabe playing in pub bands uses a variety of effects pedals, several guitars, capos, funny tunings etc., Lee makes it all happen on one instrument with only a plectrum and a tremolo arm; most impressive. 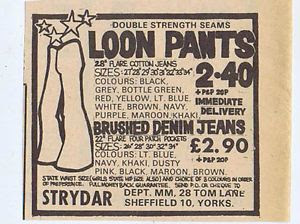 My evening was further enhanced by a member of the audience wearing brushed cotton loon pants such as used to be advertised in the back of the NME when I was an undergraduate. And some people call the seventies the decade that fashion forgot; how wrong were they?