And so to the theatre. I have been to see the National Theatre broadcast of Hedda Gabler, Ibsen's play about mind games, ennui and overreaction. The title character is horrible, terrifying and unhinged in equal measure, but you can see why female actors like playing her; there is plenty to get your teeth into. In the always interesting filmed interview in the interval the director explained that he updated it to the present day because he wanted to bring out the relevance to the 21st century. As usual I'm not sure that I agree; the issues that the play deals with are surely rooted in the attitude towards and legal position of women at the end of the twentieth century. Or perhaps one should say the changing attitudes, because part of Hedda's problem (along with being bonkers) is that she clearly doesn't want to embrace the opportunities opening up for women as emancipation develops. She wants to be kept in luxury by her husband - whom she despises - in the same way that she was by her father - whom she adored. 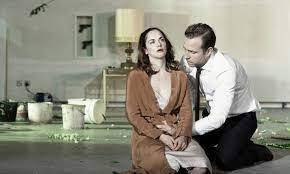 The set deliberately has no doors (a design feature that caused logistical problems at the end when the actors left the stage after taking a bow before returning to take a second. I was very surprised by this; given the ego of theatre folk I always assumed that the curtain call was the very first thing that was rehearsed.) and is meant to make one think of a prison, albeit a rather bourgeois one. The Tesman's money worries are of the sort that still allow them to keep and mistreat a maid. Like all great plays it makes one think. In my case my main thought was the same as one previous occasions that I have seen it: why on earth did they let someone so deranged keep two pistols? It was bound to end in tears.


Unexplained mystery of the evening: why was Rafe Spall wearing trousers two sizes too small for him?
Posted by Epictetus at 09:41