There is method in 't

"Madness in great ones must not unwatched go." - Claudius

And so to the theatre. I have been to see Hamlet, a rather bashed about and - thankfully - very much shortened version of Hamlet, but Hamlet nonetheless. The questions you are immediately going to ask are which male characters were played by women - Horatio and Rosencrantz - and whether it was in modern dress - no. Several characters and many scenes disappeared; the absence of Fortinbras meant that Horatio was literally the only person standing at the end, and she seemed to be looking longingly at the cup with poison in it.

Icarus Theatre Collective, for it was they, claim to "relish what others shy away from, show what others daren't", but in terms of staging it was pretty much like every other version of the play that I've seen: ghosts, madness, death and famous quotes by the bucketful. In this version the lines you recognise weren't always in the mouths of the characters that you expect (i.e. the ones that Shakespeare wrote them for) or indeed of any characters at all; the versatile cast, when not playing a particular role, often stood around acting as a sort of chorus, chiming in either instead of or as well as the actors whose scene it was. I must admit that I didn't really get the point of the speaking in unison. It just seemed to make it harder to make out the words. On the other hand in case one didn't fully appreciate the most famous bit - "To be, or not to be" obviously - they stuck it in three times in different places.

None of the above should be taken as indication that I didn't like it; I found it very entertaining with plenty of energy. The sword fights were excellent. I realise that this is fast becoming one of the standards by which I judge plays; forget the poetry, what about the fencing? 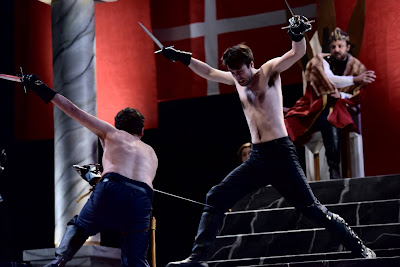 Going back to me not getting the point of things on the stage, at the weekend I bumped into my friend the theatre critic of the Morning Star for the first time in ages. I asked her about Pygmalion, which she had reviewed more favourably than I thought it warranted. It seems that where I saw much of the action taking place in fish tanks for no discernible reason beyond the director's wish for a gimmick, she saw a symbolic representation of the social constraints under which women of a certain class had to live their lives.

"There is nothing either good or bad, but thinking makes it so." - Hamlet
Posted by Epictetus at 12:12