In which I am not ill

Normally, when your bloggist disappears for a while he has been ill. But not this time, I am at peak fitness (a). Harold Macmillan was once asked by a journalist what he feared most as Prime Minister. "Events, dear boy, events." was his reply. And so it has proved here; there have been events. I'm not sure what the long term fall out, if any, will be, but in the meantime let us attempt to return to normality. Actually, let's break the mould - to misuse another political cliché - and talk wargaming.

Last night saw the second half of a  most enjoyable crusades game in the legendary wargames room. The Saracens (i.e. not me) won by dint of the last three turns ending very quickly on doubles. However the fact that they were ever in danger of losing was because they had drawn morale badly at the beginning whereas I had drawn rather well. Having said that, one reason that the crusaders didn't do better was the abysmal performance of their cavalry (or to be more precise their Christian cavalry - their Moslem allies did rather well) who didn't move very fast and when they did get there fought like wusses. The Hospitallers - cream of the army - were knocked back by a few skirmish bowmen and the knights guarding the True Cross got seen off by someone equally useless. Which all goes to illustrate some of the reasons why, in my opinion, the Piquet family of rules provide such good games. The many variables interact one with another in ways that are unpredictable. It reminds me in many ways of a well designed boardgame, with multiple paths to score victory points, all of them interconnecting, but doing so in ways that alter each time you play it. The new catapults were good too.

And some exciting news from the annexe: I have had some shelves put up. 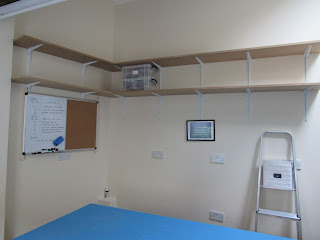 (a) It must be understood that this represents peak fitness for your bloggist; everything is relative.
Posted by Epictetus at 12:15